But one of the biggest problems associated with engine downsizing is temperature control; conditions within smaller engines are so extreme that an entirely new range of materials is required.

“High operating temperatures can be a considerable challenge, particularly as no lubrication can sufficiently withstand the conditions in order to reduce friction or wear,” explains Dr. Bob Pratt, Sintered Products Research Manager with Federal-Mogul. “We have to be able to produce parts that provide long-term durability and high-temperature corrosion resistance as engine designers push exhaust gas temperatures up to 1050°C (+/-1900°F), compared with around 800°C (+/-1500°F) for a typical engine application.” Challenges include high temperature oxidation resistance and the need for co-efficients of thermal expansion to be compatible with housing materials. Additionally, the components have to be manufactured to a consistently high quality and at an affordable price.

Over the last decade, the automotive industry has seen significant growth in the use of sintered components (where the part is formed from powdered metal products), promoted largely by the high-yield potential offered by near net-shape forming. Another increasingly useful benefit of the technique is that forming parts from powdered metals allows a very high degree of freedom with regards to product design. Compared to traditional forging and casting, sintering allows material compositions to more precisely match the performance requirements of the final component, while final machining tolerances can also be taken into account.

In conjunction with its materials development programme, Federal-Mogul is also developing machining methods to suit multiphase materials containing very hard particles. “Every change in composition and part geometry has an impact on machineability that has to be investigated,” says Pratt. “As well as considering this during our materials development, we are working with machine suppliers to help them develop improved tooling and processes to allow efficient machining of hard, high-density, near net-shape components with improved tool life, reduced scrap and lower process times.” 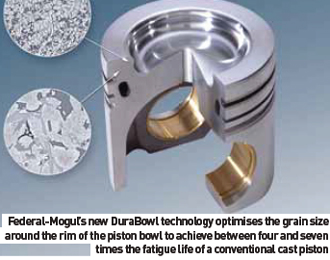 High exhaust gas temperatures are also creating challenges in the combustion chamber, where engine designers need to be able to optimise system geometry without the additional constraints of needing to protect components from the increasingly harsh environment. The characteristics of diesel combustion create a particularly severe set of conditions, as associated temperatures and pressures can increase the risk of the piston bowl rim failing.

Having analysed the problem, experts at Federal-Mogul have concluded that both thermal and mechanical failure of the piston bowl can be traced back to the presence of free primary silicon particles distributed throughout the aluminium matrix. Aluminium expands approximately eight times more than silicon, creating stresses within the piston material as temperatures fluctuate. Each time the cylinder fires, repeated mechanical loads can initiate fatigue failure from the corners of the silicon particles, yet the silicon content must be retained due to its necessity in the casting process.

Until recently, the only solution to this problem has been to use fibre-reinforced pistons. But Frank Doernenburg, Federal-Mogul’s Director of Technology, Pistons and Pins, says that these can increase manufacturing complexity and as yet, there is as yet no reliable, non-destructive method for testing the integrity of the finished part.

To solve this problem, Federal-Mogul has developed a new manufacturing process called DuraBowl, which involves pre-machining the cast piston and then re-melting the alloy around the rim of the bowl. The re-melted alloy cools up to one thousand times faster than a part made from the original material, a result of the silicon particles in the new melt being only one tenth of their original size. Metallurgists refer to this as ‘refinement of the microstructure’. Quality testing can be carried out using established eddy current techniques.

“The strength and efficiency of our solution is that the process is physically simple,” says Doernenburg. “The sophistication is in the control of key process parameters, which ensures consistent quality. The result is a technicallyadvanced, cost-competitive, high-performance product superior to both fibre-reinforced and steel pistons.” Doernenburg claims that the resulting products offer a potential component lifespan between four and seven times that offered by a conventionally-cast piston. The first application of the DuraBowl process will be on a highperformance V6 diesel engine to be launched by Mercedes- Benz.

Sealing of the exhaust is equally critical. Permissible emissions levels are so low that micro-leakage that would previously have been dismissed as test noise can now incur heavy fines for either the manufacturer or the consumer. To make things yet more complicated, exhaust joints are dynamic interfaces. 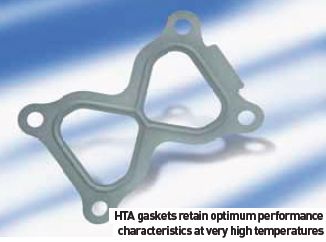 With single-layer gaskets, a thin layer of hardened steel is embossed with bead shapes that effectively form a spring. During joint assembly, these are compressed to provide the necessary gasket dynamics and to maintain a tight seal. As exhaust gas temperatures exceed 425°C, the 301 stainless steel of the single layer system is less able to spring back.

This can be compensated for by adding more gasket layers, but this adds cost and creates additional potential leak paths. As temperatures increase, the thermal degradation of stainless steel means it may not be suitable at all, as Gérard Chochoy, Federal-Mogul’s Senior Vice-President, Powertrain Sealing and Bearings, explains: “On some applications, we are fast approaching a point where today’s multi-layer stainless steel gaskets are being taken to the performance limits of their thermal and mechanical properties.”

To address this need, Federal-Mogul has developed a number of high-temperature alloys that improve the recovered height of the gaskets by between 200 and 500% when compared to 301 stainless steel.

“It is an affordable, innovative technical solution,” says Chochoy. However, providing a metal gasket material is only half the challenge. To address surface imperfections in the gasket and the mating flanges, a pliable coating was also needed to provide the requisite micro-sealing.

Molybdenum-based coatings are the usual solution, but at temperatures above 600°C, these too tend to break down. To solve this problem, Federal-Mogul has developed it’s hightemperature coating (HTC), containing a carefully designed triple binder system that provides both superior sealing performance and consistent friction properties over a wide temperature range. It is not, says the company, elastomer based.