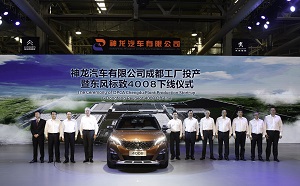 China – The fourth factory of Dongfeng Peugeot Citroen Automobile (DPCA) will make Peugeot, Citroen and Fengshen vehicles on the PSA Group’s EMP2 platform. Production will begin in November 2016, with the new Peugeot 4008 SUV.

“This new plant will help us to expand our vehicle range in the fast-growing SUV segment and meet the needs of our Chinese customers," said Carlos Tavares, chairman of the management board, PSA Group. “It represents an important step in implementing our ‘Push to Pass’ plan and achieving our objective to launch 20 new models in China by 2021 and sell over 1m vehicles in the region by 2018.”

DPCA describes the Chinese market as offering “great potential”, noting that car ownership currently stands at 75 vehicles per 1,000 inhabitants in a country with the world’s largest middle-class, which comprised 110m people by the end of 2015 and is set to rise to 220m by 2022. The SUV segment accounts for 38.8% of the Chinese market, with growth of 53% in 2015 and 44% in the first half of 2016.

The Chengdu factory, which has an annual capacity of 300,000 vehicles, was constructed in two years and uses a flexible manufacturing system which involves close co-operation with suppliers. According to DPCA, the plant will also adhere to “the most stringent environmental principles”.

In addition to the CAPSA plant in Shenzen, which makes DS models, DPCA’s production footprint in China now consists of three assembly plants in Wuhan, Hubei Province, and the new site in Chengdu, Sichuan Province.