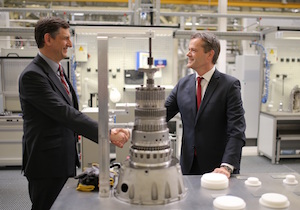 Romania – The OEM’s subsidiary, Star Assembly, has started making the 9G-TRONIC, nine-speed automatic transmission. Daimler is investing over €300m ($341m) in the capacity expansion, adding 1,000 personnel to the existing workforce.

The 9G-TRONIC was initially available in the E350 Blue Tec and the GLE coupe was the first model to be equipped with the transmission from the outset. All E-Class drive variations now feature the transmission as standard and in future it will be used in almost all model series with longitudinally mounted engines.

Daimler says the new production space covers the size of ten football pitches, its construction requiring 5,000 tonnes of metal and 500km of cable. Ahead of the production launch, employees received intensive training over several months at the Untertürkheim factory.

The vehicle-maker currently employs over 1,800 workers at the two sites operated by its Romanian subsidiaries. Established in 2001, the Star Transmission plant at Cugir makes gearwheels and shafts plus machined components for engines, transmissions and steering systems. It also houses a technology centre and a training facility. Star Assembly was launched in Sebes in 2013, producing five-speed automatic transmissions initially and adding the seven-speed version in 2014.