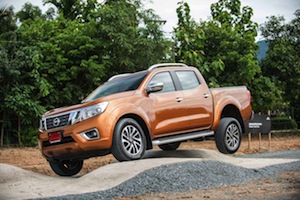 Germany/Japan – The five-year partnership will extend into the pick-up truck segment, with the development of a one-ton model for Mercedes-Benz. The pick-up will share some architecture with the new Nissan NP300 but be engineered and designed by Daimler, displaying “all of Mercedes-Benz’ distinctive characteristics and features”, say the OEMs.

The vehicle will have a double cab and be aimed at both personal-use and commercial customers. The primary target markets will be Europe, Australia, South Africa and Latin America. The model will be made at one plant in Europe and another in South America, alongside the NP300 and a one-ton truck being developed for Renault – also a brand first, and set to launch in 2016 at Nissan Cuernavaca, Mexico.

For the Mercedes-Benz pick-up, Renault’s plant in Cordoba, Argentina, will cater to South American demand, while Nissan’s plant in Barcelona, Spain, will make the same three models for other markets, excluding North America. Output will be almost 70,000 units per year at Cordoba and around 120,000 at Barcelona. A high parts localisation rate is set to significantly expand the supply bases in both Spain and Argentina.

“Entering the rapidly growing segment of mid-size pick-ups is an important step in continuing our global growth path,” said Dieter Zetsche, chairman of the board of management at Daimler and head of Mercedes-Benz Cars. “Thanks to our well-established partnership with the Renault-Nissan Alliance, we are able to drastically reduce the time and cost to enter this key segment.” Nissan has been making one-ton pick-up trucks for over 80 years, turning out more than 14m units.

“Thanks to our co-operation with Daimler on this project, we will be able to share the cost of investment at the Cordoba plant, while at the same time open up new markets in the Latin American region for the Renault-Nissan Alliance,” said Carlos Ghosn, Renault-Nissan chairman and CEO. “This project will also allow us to optimise production capacity at the Barcelona plant and enhance our competitiveness in an important segment.”

Established in 2010, the collaboration between Daimler and Renault-Nissan was initially limited to three projects focused on Europe. Since then, it has grown to 13 projects in Europe, Asia and the Americas.