An array of composite materials are now available to vehicle-makers, each with special properties and production processes; but challenges remain in the cost and speed of manufacture – plus recyclability 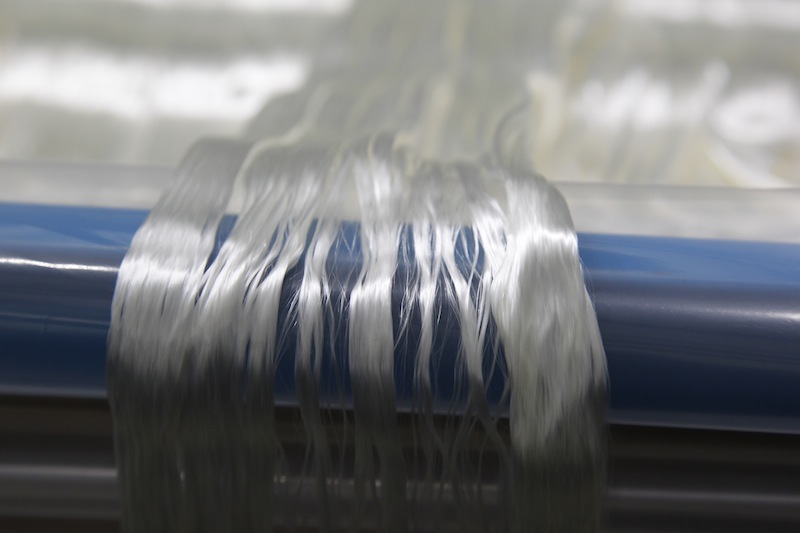 Although the advantages of polymer composites are well known in the automotive industry, their use has been impeded by high material costs, slow production rates, concerns over recyclability, and the industry’s general lack of experience and comfort with the material in comparison with metals. Composites producers and carmakers are now working feverishly to solve these problems, although much work remains to be done.

A composite is a combination of two or more materials that possesses better mechanical properties than its individual components. In contrast with metallic alloys, each material retains its separate chemical, physical and mechanical properties. The two constituents of a polymer composite are a fibrous reinforcement – based on carbon, glass or natural materials such as flax – and a polymer matrix. The reinforcement provides the composite with its strength and stiffness, while the matrix holds the material together.

Carbon fibres generally exhibit excellent tensile and compressive strength, demonstrate high modulus (stiffness), have excellent fatigue characteristics and do not corrode. They have been used in Formula One since 1981 but until recently were considered too expensive for anything except high-performance road cars.

The starting point for the production of carbon fibre is the precursor – typically thermoplastic polyacrylonitrile (PAN), owing to its high degree of molecular orientation, high melting point and high yield. In a complicated and energy-intensive process, the constituent elements of this precursor are removed one-by-one, eventually yielding a fibre that consists of virtually pure carbon with a stable graphite structure.

The price of PAN is tied to the price of oil, which is high and has been unstable in recent years. Furthermore, the production of carbon fibre accounts for such a small amount of the acrylonitrile produced and sold each year that the industry has little leverage in terms of negotiating more favourable prices with the producers of the thermoplastic.

At its plant in Moses Lake, Washington, SGL Automotive Carbon Fibers (ACF) produces carbon fibres for the BMWi models. The joint venture between BMW and SGL Group uses electricity generated locally using hydropower to significantly reduce energy costs and the impact of the production process on the environment.

Exploiting economies of scale, the cost of producing carbon fibre will be further reduced by increasing the plant’s output. SGL-ACF plans to triple the capacity of its Moses Lake plant from 3kt a year to 9kt a year by 2015, at a cost of around €200m ($250m). The expansion will also allow BMW to increase the carbon fibre-reinforced plastic (CFRP) content in its other vehicles­­­; in 2015, the company will start using the material in its 7-Series models.

Cheaper carbon fibres could also be produced by using alternative precursors to PAN, such as lignin, which is currently being studied by the Polymer Matrix Composites team at Oak Ridge National Laboratory (ORNL). The researchers are also developing a method of producing carbon fibres from polyethylene (PE), which yields a greater amount of carbon than PAN (86% compared with 65%), and could be sourced from post-consumer recycled waste.

The two most common types of glass fibres used in automotive composites are: E-Glass, which is cheap and provides a good combination of tensile strength and modulus; and S-Glass, which is more expensive but 40% stronger than E-Glass. 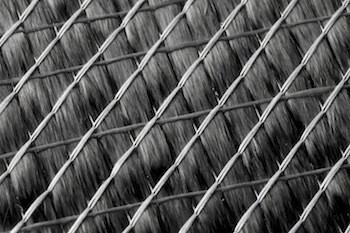 US-based materials provider AGY is attempting to bridge the gap between these two formulations with its S-1 HM Glass. Employing a proprietary glass formulation designed to maximise performance while allowing for high-volume and economical manufacture, the S-1 HM fibres provide significantly higher modulus and enhanced fatigue performance in comparison with traditional E-Glass. For example, the fibres demonstrate a tensile modulus of 90GPa – 20% higher than that of E-Glass.

These reinforcements can be incorporated into polymers as chopped fibres to increase the strength of parts made using compression and injection-moulding processes.

Non-woven fabrics
However, to fully harness the potential of these reinforcements to improve the mechanical properties of plastic parts, they need to be incorporated as woven or non-woven fabrics. These fabrics are produced by converters such as UK-based Formax.

According to the company’s director of innovation, Tom James, there can be a wide variation in the mechanical performance of fabrics with the same areal weight, but differing constructions in terms of stitch length, stitch style and fibre orientation. A fabric must be extensively tested and optimised with respect to strength, stiffness and ease of infusion in order to determine the best parameters for a given component prior to the production run.

Drape and fibre orientation are especially important parameters for producing the carbon fibre preforms used in the resin-transfer moulding (RTM) processes employed by the likes of BMW for the mass-production of CFRP structural components.

All of these variables present a significant headache for car designers more used to working with comparatively straightforward metals. Formax is currently developing software that will allow it to simulate the behaviour of dry fabrics during moulding, which would make the fabric selection process more straightforward.

The orthotropic behaviour of reinforced plastics (meaning that they have properties which are different in three mutually perpendicular directions) can also pose problems for designers. James says: “Conventional composites can be manufactured to be quasi-orthotropic [with fibres in multiple orientations in the X and Y directions] and hence can deal with in-plane loads in a similar way as metals.

"However, the through-thickness properties of conventional composites are generally governed by the lower properties of the matrix, due to lack of fibres in the Z direction, and hence this is considered to be the Achilles heel of composites. Formax is currently working on several collaborative projects to try to overcome this problem.”

What makes the matrix?
The matrix that gives composite components their shape can be thermosetting or thermoplastic in nature. Thermosets become substantially infusible and insoluble when cured by thermal and/or chemical means. After curing, a thermoset cannot be returned to its uncured state.

Thermosets are relatively expensive, but demonstrate high strength. As such, they are widely used in the production of discontinuous glass fibre-reinforced sheet and bulk moulding compounds (SMCs and BMCs). These compounds can be used for the high-volume injection and compression moulding of a variety of non-structural automotive parts. 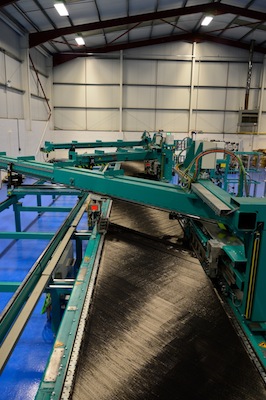 Furthermore, the low viscosity of some thermosets such as epoxy makes them highly suitable for use in high-pressure resin-transfer moulding (HP-RTM) processes, in which a mixing head injects resin into a closed mould cavity and saturates the dry fibre preform inside under high pressure. Indeed, epoxies are currently preferred for the production of structural components.

To produce the i3’s monocoque, BMW uses Huntsman Advanced Materials’ Araldite LY 3585/Hardener XB 3458 epoxy system for the production of the CFRP monocoque in the i3. Huntsman claims that the low viscosity of the system plays an important role in the entire process, from the dosing and mixing right through to impregnation, and ensures good fibre wet-out in the mould. The system can cure in just five minutes at 100°C.

In contrast with thermosets, for which the cure reaction cannot be reversed, thermoplastics harden when cooled yet retain their plasticity; they will re-melt and can be reshaped by reheating them above their processing temperature. Thermoplastics tend to be cheaper and offer increased impact resistance, as well as hardening quickly at relatively low temperatures, meaning that reinforced thermoplastic parts can be produced rapidly with short cycle times.

Discontinuous fibre-reinforced thermoplastics, such as polypropylene (PP), are commonly used to injection-mould front-end carriers, instrument panel carriers, door panel supports, consoles and pedals. However, the high viscosity of thermoplastics has prevented them from being used for the series production of structural components, as it makes them incompatible with RTM processes.

Shortened cycle times
This situation could change rapidly. Teijin and its partner General Motors are working on materials and processes that could enable the press-forming of continuous-fibre reinforced thermoplastic structural components in cycle times of under a minute. Called Sereebo, the technology has been shrouded in secrecy since its announcement in March 2011. 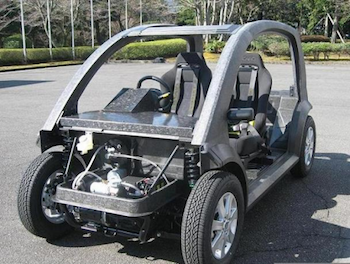 Little else is known about Sereebo outside TCAC (at least by those who have not signed a non-disclosure agreement), and it remains to be seen how the technology will evolve.

Recycling challenges
In theory, the fact that thermoplastics can be re-melted makes them much easier to recycle than thermosets. European Union (EU) end-of-life directives stipulate that 80% of the materials used in a new car have to be recyclable. There is a relatively straightforward way of recycling composites: they can be ground down and used as filler in concrete. For low-value filled plastics, this approach is viable, but for high-value CFRPs it is not an elegant solution. If the carbon fibres could be separated from their polymer matrices, they could be used as a cheaper alternative to virgin carbon fibres in non-structural applications.

The re-use of waste carbon fibres and fabrics is reasonably well established, with fabrics made from recycled carbon fibres commercially available. Formax sells a reinforcement, called reFORM, that it manufactures entirely from multiaxial production waste for a variety of applications, including structural ones, across a range of industries. Formax says that the fabric demonstrates high drape and permeability, quasi-isotropic mechanical properties and thermal stability for tooling applications.

Separating fibres from cured and uncured thermoset matrices in order for them to be reused is significantly more challenging, but several companies are doing just that.

MIT-RCF’s facility in Lake City, South Carolina, uses pyrolysis – in which CFRP scrap is heated to 400-500°C in the absence of oxygen, yielding a clean carbon fibre that maintains 90-95% of its original mechanical properties – to recycle CFRP parts and is able to process 1.36-2.27kt of the material a year. As well as producing chopped carbon fibres, MIT uses the reclaimed material to manufacture complicated preforms for part manufacturers via its proprietary three-dimensional (3D) engineered perform (3-DEP) process. 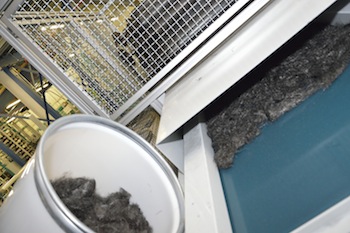 The company’s executive vice-president, Mark Housley, says: “For modest structural parts, the chief hurdle [to recycling] is that carbon fibre, even recycled carbon fibre, costs more per pound than aluminium, steel and fibreglass. In chopped form, reclaimed carbon is already available in a fairly wide range of thermoplastic compounds, so part design and manufacturing systems are already in place. Thus it is a pretty straightforward programme."

He continues: “In parts derived from carbon fabric formats it is more complex. CAE/FEA [computer-aided engineering/finite element analysis] models for the utilisation of non-woven carbon fabric, formats are not as developed as they are for continuous woven and tape fabrics, so both design and verification datasets must be developed on a part-by-part basis.”

So then, composite materials pose a varied set of challenges for carmakers and their suppliers; however, their light weight, excellent mechanical properties and opportunities for part integration make them a compelling alternative to metals in a range of structural and non-structural applications.