Clearcut a key matter for matt

They are a real eye-catcher at major automobile exhibitions. More and more carmakers are presenting models with matt finishes. Previously only used with custom paint jobs, now they are increasingly being used in smaller production runs as well. Recently, BASF introduced its current colour collection, which include a new matt clearcoat technology. 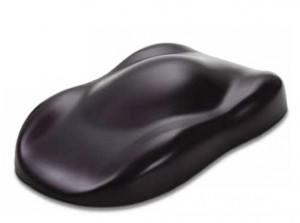 As the top layer of automotive coatings, clearcoats provide extra protection and scratch resistance. Glossy finishes have something ‘untouchable’ about them, but matt clearcoat makes you want to run your hand over the silky, smooth surface. “Matt clearcoat changes the effect of the coating. The mutedlooking finish has something of a plastic look to it. They give silver colours in particular a cool, high-tech feel and create almost haptic effects,” said BASF colour designer Eva Höfli. “The resulting contrast between matt and glossy automobile add-on parts is particularly striking.”

The material used to produce the matt look has the consistency of a fine powder and is mixed with a standard clear. “Chemically it is like sand or glass, but extremely fine and highly porous,” explains Dr. Holger Krumm, lab manager at the BASF automobile clearcoat competence centre.

The more matting agents are stirred into the clear, the greater the effect. “It is thus possible to have differing degrees of gloss in the hardened finish,” says Andrea Rump, BASF clearcoat product manager. Matt clearcoats are used in OEM coating and for coating add-on parts, and they are available in a variety of clearcoat technologies. “The look of a matt clearcoat is also heavily influenced by the underlying layer of paint, i.e. the basecoat,” Rump emphasized. “The matt shimmer remains even after years. The products have been extensively tested with regard to this in weathering tests.” 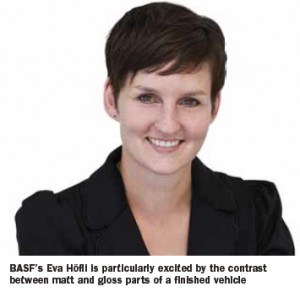 A sparkling future
The application of matt clearcoats is a sophisticated procedure that differs from standard OEM coating. That is why in the past it has only been used in smaller circulation lines for individual series. “We are working steadily to further optimise matt clearcoat technologically, as we expect demand to rise,” remarked Holger Krumm.

BASF matt clearcoats are not very sensitive, but rather robust and easy to care for. Fingerprints or a bit of dust are not as noticeable as on a glossy finish. Smaller scratches are very hard to see. Car washes are also no problem. However, the clearcoat must not be polished since that will make it look glossier. Andrea Rump looks to the future: “BASF Coatings’ matt clearcoats are technically mature and trendy in terms of optics.” Thus, matt clearcoats will have more sparkling performances in the future.