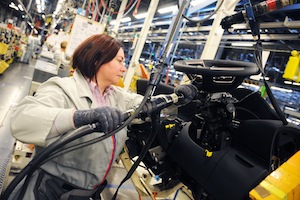 France – The OEM will devote its investment to the production of a Peugeot-badged model to replace the current Peugeot 5008. The vehicle will be built on the EMP2 platform which has already cost €630m to develop and will roll off the Rennes-La Janais production line in mid-2016, coming to market worldwide at year-end.

Denis Martin, executive vice-president, industrial operations, noted that the Group “has made firm commitments as part of its new social contract, in particular as concerns the production of new vehicles in its French plants”. Referring to the new investment, he said: “We are demonstrating that these commitments are being met.”

Production volumes are expected to reach 70,000 units per year from 2017, increasing the plant’s total output to more than 100,000 vehicles.