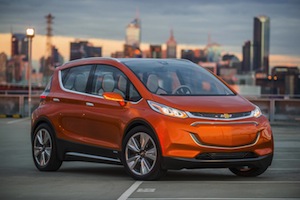 US – Based on the Bolt electric vehicle (EV) concept, the new model will be built at General Motors’ Orion Assembly plant in Michigan. Orion and the Pontiac Metal Center are the subject of a $200m investment to support the production, the former receiving $160m for tooling and the latter taking the remainder for new dies.

“As one of the most environmentally progressive facilities in GM’s global network, Orion Assembly is uniquely suited to build this game-changing electric vehicle,” commented Doug Hanly, Orion Assembly and Pontiac Metal Center plant manager. Orion is powered by gas from two nearby landfills, saving over 6,300 tons of CO2 per year. The plant also has a 350kW solar array which generates enough energy to feed back into the grid.

The start of production has yet to be announced.