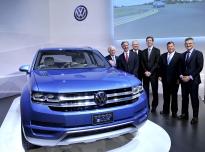 US – The OEM will invest $600m in the Tennessee plant as part of its $900m investment in the production of the seven-passenger SUV. The model will be the second built at Chattanooga after the Passat, with production beginning in late 2016.

The midsize SUV, which is based on the CrossBlue concept, will be integrated into existing production by the addition of 50,000 sq.m of floor space. VW says its expansion will create 2,000 new jobs.

Chattanooga will also be the location for a new National Research & Development and Planning Center for project co-ordination in the North American market, which will require a workforce of 200 qualified engineers. The objective is to integrate customer feedback into existing and planned models.

Welcoming the announcement by VW, Ron Harr, president and CEO of the Chattanooga Chamber, commented: “Thanks to Volkswagen’s expansion, we will have a much easier time recruiting additional automotive suppliers to help them build out their supply chain while also cementing Chattanooga as ‘The Center of the Automotive South.’”

Martin Winterkorn, chairman of the board at Volkswagen Aktiengesellschaft, described the move as “a strong signal for the US as an industrial and automobile production location”. He added: “The Volkswagen brand is going on the attack again in America.”