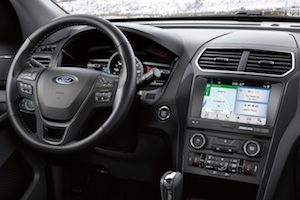 China - At the 2018 Beijing International Automotive Exhibition, Ford showcased several new models and claimed that it was starting its "biggest new vehicle launch ever" in the country. This follows soon after the company said it would launch 50 new vehicles by 2025.

Part of the plan includes the launch of the new Explorer, which is the best-selling SUV in the US. The model will be manufactured locally by Changan Ford - a joint venture that originally included Mazda before separating into two companies in 2012. Changan Ford operates one plant in Hangzhou and five in Chongqing.

"Our relationship with partners is more important than ever as we work together to build a bigger, better and brighter future for the Ford brand in China, and offer more choice to customers," said Nigel Harris, president of Changan Ford. "By 2021, dealers will have the opportunity to more than double their showroom products, encompassing Ford passenger cars, SUVs, electrified vehicles and trucks."

In June 2017, Ford announced that it was scrapping plans to build the new Focus in Mexico in favour of making it in China. The model is currently built at the OEM's Michigan Assembly Plant.