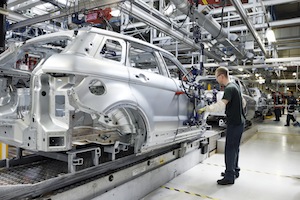 UK – A total of 1,424,023 units were manufactured in the first 11 months of 2013, representing an increase of 4.5%. The figures were released by the Society of Motor Manufacturers and Traders (SMMT), which said the UK automotive industry’s performance was the best since 2007. Its CEO, Mike Hawes, said the industry was “on track” to pass the 1.5 million mark by the end of the year.

Hawes noted that volumes dropped by 3.6% in November as vehicle-makers used the month to prepare their production lines for new models, but said the upcoming models “will play an integral part in what is predicted to be an even stronger 2014 for UK car manufacturing”.

It was a different story for the commercial vehicle (CV) sector, where output plummeted by 35.7% in November to 7,061 units. Production was down by 21.5% to 82,535 units over the 11-month period. Hawes attributed the drop to “ongoing weak European demand and changes to UK manufacturing operations”. The SMMT expects CV manufacturing to remain “subdued” until mid-2014.