Laser welding is increasingly used in high-volume vehicle production, including at BMW Swindon in the UK 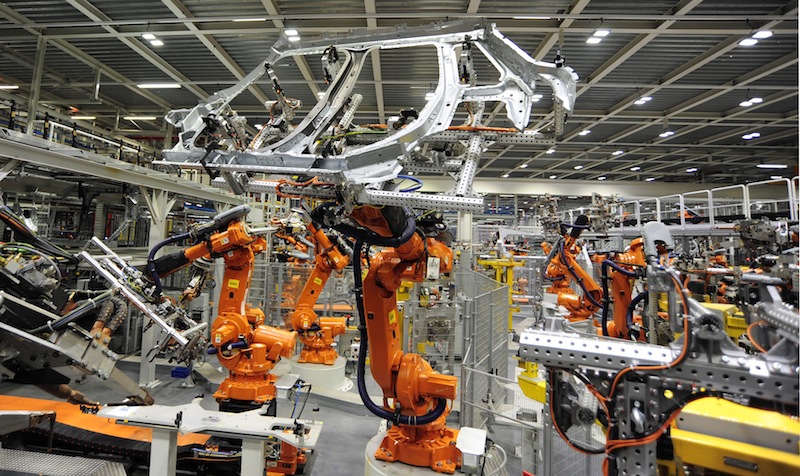 BMW’s Plant Swindon in the UK manufactures the shared bonnet for the three- and five-door Minis, as well as the six different doors the vehicles use (left and right, front and rear) and a tailgate assembly. A number of joining technologies are used, from the relatively old to the leading edge. The established technique of hemming is now only used to join together the inner and outer sheets of the tailgate. For the bonnet and doors, laser welding has replaced hemming as the means of joining outer panels to inner assemblies. In those instances, tactile laser welding (TLW) is used, which involves a thin length of steel wire being inserted into the weld gap and fused into place by the laser process to ensure a perfect seal between the panels.

Swindon is also the site at which BMW has been developing remote laser welding (RLW), the technique by which a laser beam generated at the side of a robotic cell is conducted by an optical cable to the robot head, where it is deflected by a mirror to its actual point of application on the workpiece. At Swindon, this has been specifically developed to attach the window frame to the inner door assembly.

All the laser processes are carried out by 17 robots across nine different cells in the sub-assembly hall – five devoted to TLW processes and four to RLW. In the first case, these are arranged as follows: one for the bonnet, one for each of the left and right front doors, and one for each of the rear doors. In the second, the distribution of work is dictated by the door variants. Part delivery to each cell is by forklift truck; conveyor systems are conspicuous by their absence. Cycle time in the laser cells is 64 seconds. Tolerances – monitored in each case by in-cell camera systems – are in all instances to within an accuracy of 0.3mm.

Minimal supervision
Staffing for all this is remarkably light. Each shift requires two specialist support staff able to operate across all the cells to fix faults and keep them running, plus, at most, a single supervisor for each cell, though sometimes just a single individual will suffice to keep an eye on two cells. Stuart Hilliard, joining specialist at Swindon, has overall responsibility for ensuring the smooth running of the cells, with little room for any mistakes or mishaps that might disrupt production. There is a buffer of just two hours’ stock, he explains, between Swindon and BMW’s Plant Oxford, where vehicle assembly actually takes place. 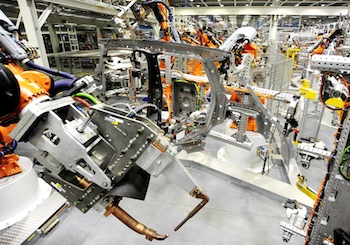 Hilliard says the use of the tactile and remote laser welding techniques at Swindon exemplifies a gradualist approach to the introduction of new technologies on the part of BMW. Though both are new to Swindon, he confirms that the tactile technique has been in use elsewhere in the group for over four years.

In addition, the well-established technique of resistance spot welding is extensively used on both the bonnet and doors for the fabrication of the inner assemblies. There are roughly 80 such welds on each bonnet and around 50 on each door. So welding operations at Swindon effectively represent three generations of the technique.

Hilliard says that both laser-based techniques now used at Swindon were worked out in Germany before installation. BMW’s previous experience of TLW means that getting it up and running was a relatively straightforward exercise. “Once you get your parts and fixtures right, it was known to be workable,” he says. But that was not the case with the remote technique. “There was a lot of development work in Swindon to make the process reliable,” he confirms, explaining that this centred on both the software and the camera-based tracking system that control and monitor the process, as well as on the quality-related issue of minimising weld spatter so there would be no impairment of the painting process that takes place at Oxford.

Room for improvement
Hilliard admits that the RLW is still a work in progress. Initially, the technique involved the application of remote laser welds to what he describes as “quite a simple structural position” and required just 12 such welds. But its use has subsequently been extended to fixing the window frame to the inner door assembly – an application that has to take account of the disruptive potential of much greater part variation. Between 30-32 remote welds are required here, with an application time of roughly one second per weld. Nevertheless, the use of the RLW technique is not incidental; Hilliard says it is vital to facilitating the production of the vehicle as it is designed. While the use of spot welding to achieve the same objective would not have been impossible, it would have been far more difficult, requiring the use of a very small welding tip.

“There was a lot of development work in Swindon to make the [RLW] process reliable" – Stuart Hilliard, BMW

As far as the equipment configuration is concerned, Hilliard says the laser source is located at the top of each cell and is conveyed to the application head by around 20 metres of cable. He explains that the laser cable is necessary because the laser is not eye-safe, adding that that cells are also light-proof. The laser source is a Trumpf Trudisk 4001 device with a wavelength of 1030nm and a power rating of 4kW.

Since the technique was applied in actual production at Swindon from late 2013, it has been brought on-line at BMW’s plant in Leipzig and also at Dutch manufacturer VDL Nedcar, which started building the Mini Hatch on BMW’s behalf from the middle of 2014. But, says Hilliard, the start of RLW series production at Swindon was preceded by some 12 months of pre-series work with the technology. That necessarily involved close collaboration with BMW in Germany and also some input from the technology suppliers. But there was much “self-tuition” based on “trial and error”, he says.

The aim of that iterative process, Hilliard explains, was to enable three separate elements of the technologies involved – “the robot path, the camera system and the control software” – to work effectively with each other to achieve consistent weld quality, which was made more difficult by the laser head being between 400-600mm distant from the point of application of the beam on the workpiece. He also believes the integration of those different technical elements means that the successful application of remote laser welding does require a higher level of skill and knowledge in the team involved than might otherwise be the case.

In contrast, the tactile technique is made much easier by the fact that the wire laid between the two workpieces effectively acts as a guide for the laser. Nevertheless, he confirms, the remote technique is now being used at Swindon as intensively as its tactile and spot welding counterparts, which means from 6am one morning to 4.30am the next, five days a week.

Variations on a theme
The basic technique of remote laser welding is not in itself particularly new. According to Comau’s Nunzio Magnano, the Italian robot system provider first introduced an RLW product using a CO2 laser as far back as 2001. Since then, it has introduced two versions of a follow-up system it calls SmartLaser – the first in 2006 and the latest in 2010. 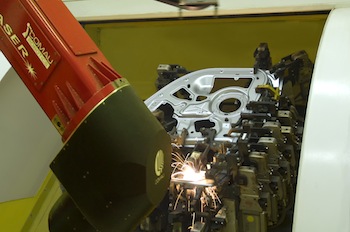 Magnano, global director of process technologies for the company’s body welding and assembly unit, describes the SmartLaser system as a “fully integrated” product comprising a four-axis robot, a scanner and a laser with a control system that has also been developed by Comau. The format of the system involves the laser source being installed outside the laser safety booth and connected to it by up to 50 metres of laser-conducting fibre, while the distance between final focusing mirror and the workpiece is about 1,000mm.

Magnano says that, compared with spot welding, the remote technique offers superior flexibility in terms of ease-of-use, throughput and elimination of downtime. Ultimately, though, he is adamant that the crucial factor is its inherent superiority as a joining technology. He explains that a single welding point is intrinsically an asymmetric junction between the plates and does not have a preferred direction of resistance. In contrast, a linear stretch of laser welding measuring, for instance, 25mm in length with a width of eight tenths of a millimetre, appears to possess about 30% more resistance depending on the type of steel involved.

A well-established user of the SmartLaser system is Fiat, which started using the product for its Lancia Delta and Giulietta vehicles in, respectively, 2006 and 2009. Now the carmaker, in its new guise as Fiat Chrysler Automobiles (FCA), is ramping up production of a new vehicle, the Jeep Renegade, at three plants around the world, each of which will use SmartLaser RLW technology. As Magnano confirms, two locations – Melfi in Italy and Pernambuco in Brazil – have started production within the last 12 months, while a third – Quanzhou in China – should get underway in the middle of this year.

Multiple applications
In fact, says Magnano, the Jeep Renegade project features three distinct laser applications within the same product manufacturing line: remote laser welding for the front and rear doors; laser brazing for the tailgate; and laser cutting for the front end. In the case of the doors, Magnano says that the SmartLaser system welds about 50 stitches per door each 20mm length. The major advantage is the speed. RLW creates two stitches per second, whereas conventional spot welding would manage only one every three seconds. Flange size is also reduced. A separate SmartLaser cell also carries out dimpling.

Tailgate laser brazing was the first application within FCA. Magnano explains that the intricate design of the tailgate meant that it could not be easily stamped in a single piece, so instead it is made from two separate pieces that are joined by the laser brazing process. Laser brazing works by heating the stamped metal pieces and then adding a liquid filler material, which is brought to its melting temperature of above 450°C, but below the melting temperature of the base metals, with the aid of the laser beam. As the laser can be focused on an extremely small area – just 2.2/3.6mm – its power density is highly concentrated, typically greater than 106W/sq.cm. The consequent seam quality is particularly apposite where aesthetics are important.

Magnano adds that the laser applications' infrastructure is identical at all three production facilities, to ensure build quality and consistency across the global manufacturing base. He says that the systems support a flexible production regime of up to 60 jobs per hour over three shifts lasting 450 minutes each. Each plant should therefore manage to produce around 350,000 vehicles per year.