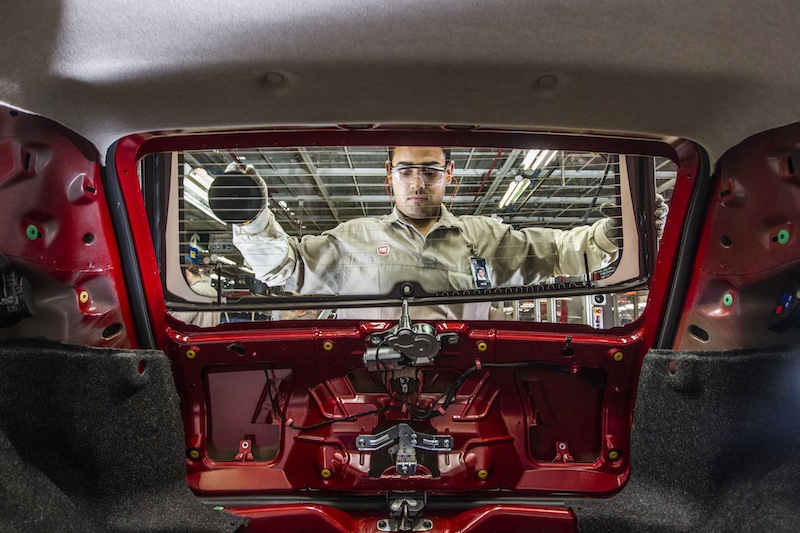 The next four years of automotive manufacturing in Brazil will be marked by the second presidential term of Dilma Rousseff, winner of the general election in October. Among the greatest challenges facing her will be a need to shore up Brazil’s automotive industry, which is facing serious problems in terms of competitiveness and has experienced a fall in sales and production in 2014 after a long period of growth. Anfavea, the association of vehicle manufacturers, predicts that the year will end with a 5.4% decrease in registrations to 3.56m, compared with the previous year. Production will experience an even greater contraction of 10% to 3.33m vehicles, light commercial vehicles, trucks and buses. The scenario for 2015 is not very encouraging; improvement is expected, but still no significant expansion of the domestic market.

The pattern of sales highlights a difficulty that Brazil was far from facing a few years ago, when sales were growing quickly: excess production capacity. As the market shrinks, vehicle-makers’ investments in new manufacturing facilities or the expansion of existing sites are maturing and the potential local production is increasing. In 2014, two new companies entered the landscape of Brazilian vehicle production. The first was China’s Chery, which began assembling vehicles in Jacareí, São Paulo, in September. The following month, BMW started manufacturing its premium vehicles at Araquari, in the southern state of Santa Catarina. In the first half of the year, another large investment came to fruition: Nissan opened its $1.5 billion manufacturing complex in Resende, Rio de Janeiro.

Before operations began at Resende, Nissan produced a few models in Brazil within the industrial complex of Renault at Curitiba, Paraná. An important sign that the rhythm of the local industry is changing is that a few months after starting production, the OEM announced that 279 employees at Resende would enter into a lay-off process. The temporary suspension of employment is intended to adjust production to the current market demand.

The consultancy Carcon LMC estimates that idleness will be more than 40% this year, taking into account the production potential of 6.5m units in South America. The situation is set to worsen in 2015, when inactivity may account for about 44% of capacity. Thereafter, utilisation should increase to a healthier percentage for the industry.

Out of all South American countries, the problem most strongly affects Brazil; in addition to housing the largest share of production capacity in the region, the country is facing export problems. For Brazil, foreign sales of vehicles are very dependent on the Argentine market, and in 2014 these have decreased significantly due to Argentina’s imposition of barriers to the import of Brazilian vehicles. Anfavea expects that 2014 will end with a reduction of 29.1% in total Brazilian exports to 401,000 vehicles.

“We have a great difficulty to access new markets. We need to be able to introduce our product into other countries,” says Antonio Megale, president of the Association of Automotive Engineering (AEA) and director of government affairs for Volkswagen Brazil. He points out that Brazil suffers from a lack of competitiveness, a problem he says is not being tackled directly by Inovar-Auto, the stimulus regime being applied to the automotive industry between 2013 and 2017. However, he says there are some indirect effects: “By imposing rules with local content for vehicles, the programme strengthens the supply chain. With the goals of energy efficiency and research and engineering, the national development is also affected positively.”

Shifting away from tax breaks
Facing the new reality within the Brazilian automotive industry, the government has already given indications of a change in policy. According to Luiz Moan, president of Anfavea, a meeting between the association and the Minister of Finance, Guido Mantega, revealed that the IPI tax discount offered to the vehicle industry since May 2012 will not be renewed. The incentive was due to end on December 31, 2014, although expectations were that it would be extended due to the current poor performance of the market.

The government position shows that President Rousseff is willing to make adjustments to the economy and that stimulus for sales will not be granted so easily in her second mandate. However, the Ministry of Finance has declined to comment on plans for the automotive industry over the next four years, saying it is a “sensitive” issue. At the time of writing, is uncertain which ministers will assume the most important portfolios for the automotive industry.

Yet the president has already announced that Mantega will not continue as head of the Ministry of Finance. Mauro Borges, from the Ministry of Development, Industry and Foreign Trade – another important post for the automotive industry – will also leave. Borges resigned to help Rousseff renew its management.

“The IPI reduction is sold out. The country is undergoing a delicate economic moment and the government must make adjustments gradually,” Megale states. “Only then we will have an effective recovery.” He believes that, despite present difficulties, Rousseff’s government has been alert to issues affecting the automotive industry. “They brought a different vision for the industry. Inovar-Auto was the first programme to provide a medium-term perspective. The vehicle production may be damaged this year, but areas of engineering manufacturers are structuring better locally, which is a good sign for the future,” he states.

Ricardo Raimer, president of SAE Brazil, the association of mobility engineers, and Schaeffler South America, agrees with Megale about Inovar-Auto, describing it as “hit” for Rousseff. But he argues that complexity is the weakness of the regime, making it difficult for companies to ensure that their actions comply with the rules. Moreover, not all of the detailed stipulations of the programme were carried out, delaying the emergence of results.

Working to solve wider issues
Megale believes that the definition of the second stage of Inovar-Auto may allow Brazil to become more than just a big market; the country will position itself as a major producer of vehicles and a developer of products and technologies. As for lack of competitiveness, the president of AEA points out that dialogue between industry representatives and the government is already occurring in a bid to find solutions. The problem, in his view, goes far beyond the limits of the automotive industry and requires extensive measures: “We have to [re]work the tax situation of the country, the logistics infrastructure and raw material prices, and to grant exemptions for the supply chain.” 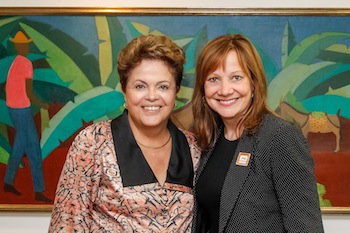 Raimer also mentions the labour issue. “The government has exempted companies' payroll in the [automotive] industry, but has to allow the flexibility of working time,” he says. For the president of SAE, it is essential that OEMs can reduce the tempo of production during a crisis and avoid the need to dismiss workers, as per the German model.

In connection, Anfavea is negotiating a change in temporary suspension of employment rules. The intention is that the dismissal period will increase from a maximum of four months to as much as two years. “Crises are cyclical and we need to have the tools to face them [while] keeping the employment level. This is a measure that will preserve the industry and employees,” comments Moan.

The president of Anfavea feels optimistic about Rousseff’s second mandate. According to him, the government has a good relationship with the industry and there is an expectation that the tax system will be simplified. “Today, we have a very large cost due to the complexity,” he states. Moan believes that the tax burden may be reduced in the medium term. Another expected action is an incentive for exports, enabling the expansion of production beyond the Brazilian market. “We need the government to enter and comply with trade agreements,” he says.

While 2015 is expected to be period of adjustment, growth is expected to recover from 2016. Despite the weak performance of the Brazilian automotive industry in 2014, there is great potential for the future. Currently, the country has 5.1 people per vehicle – a very low rate compared with neighbouring Argentina, which has around 3.5 people per vehicle. “To reach this level, we would need to add 20m vehicles to the national fleet,” estimates Megale, indicating that automotive companies which are setting up manufacturing facilities in the country should not be disappointed in the medium term.