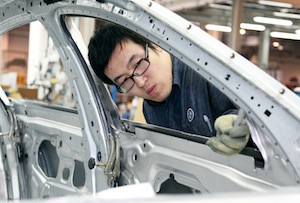 China – Produced at the newest plant at the OEM’s joint venture Shenyang site, Tiexi, the milestone unit was a long version of the 3-Series Sedan, a model which has been manufactured exclusively for the Chinese market since 2012. The total was reached 12 years after the start of operations.

Harald Kruger, member of the management board with responsibility for production, described the two vehicle plants, plus the adjacent engine facility, as “a vital element” of BMW’s global production network.

Tiexi and Dadong have a combined capacity of 300,000 vehicles per year, which will be raised to 400,000 over the next two years. The range of locally made models will also increase from three to six. By 2016, the engine plant supplying the factories will be supplemented by a larger powertrain facility, including a foundry, which is currently under construction.

BMW has invested more than €2 billion ($2.4 billion) at Shenyang over the past five years.