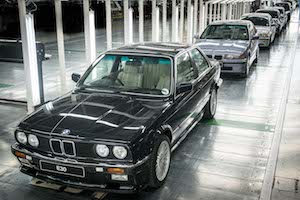 South Africa - The German OEM has been producing the 3 Series at its plant in Rosslyn for 35 years, and recently announced that the last unit was made. The plant will stay open and will soon start production of the X3, while 3 Series production will be moved to the company's new plant in Mexico, which is due to start operating in 2019.

A spokesperson for BMW explained the move to AMS: "Based on the evaluation of our production network and market conditions - especially the growth of BMW X models, we decided too allocate the production of the 3 Series Sedan within the global BMW Group production network... In regards to the X3, it will be produced for the local South African market and exported to Europe from Rosslyn."

The company's Spartanburg plant in South Carolina also produces the X3, supplying it to both the US and exporting it to various other markets. However, BMW is confident that demand for the model in South Africa warrants local production.

"Plant Rosslyn was selected based on growing market demand of BMW X models and the SUV segment," the spokesperson continued. "For example, this year we introduced the X2, and new models such as the X7 will follow later in the year to expand our offering in the segment even further. These models now resent some of the most successful in the BMW line up, accounting for over 30% share of global sales."

BMW is spending 6 billion rand (US$52m) to prepare for X3 production at the Rosslyn plant, 3 billion of which will be set aside for "suppliers, launch costs and training of employees." The other 3 billion will be spent on "state-of-the-art infrastructure."

The investment follows soon after the company spent 160 million rand to improve production line speed in October 2017. According to the spokesperson, this increased maximum production capacity by around 10% from 71,000 units to 76,000 units per year.