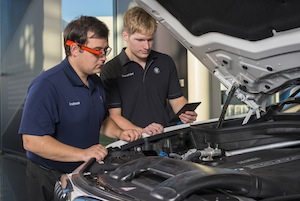 US – The pioneering project at the OEM’s Spartanburg plant, South Carolina, is aimed at determining whether wearable technology can enhance workflows in quality assurance. The Google Glass devices are intended to improve communication between quality testers at the analysis centre for pre-series production and development engineers.

The smart glasses enable workers to take photos or videos to document deviations during pre-series production testing, providing a faster and clearer means of subsequent analysis. BMW had found that standard written descriptions prompted requests for further information from the responsible specialist department in 25% of cases.

Each Google Glass device is fitted with a camera which has three different settings: photos, video and background video. In background mode, the video is always turned on, and every two minutes the visuals are temporarily stored; these can later be transferred to a plant server as a permanent record. “During the term of the pilot project, we are planning to add a video call feature so that a problem can be discussed with the responsible development areas right there and then,” added project coordinator, Jörg Schulte.

The promising results of the pilot project have led BMW to consider applying the technology in the final assembly of series vehicles; currently, data from between ten and 25 tests is entered into stationary computer terminals. “With Google Glass, the testing staff could stay right at the vehicle, look at the test plans on the device’s integrated display and sign them off via voice control. So both hands would be free to conduct the tests at all times,’ commented Schulte.

BMW is now assessing how the innovation could be used in other production areas and at other sites. The project is part of the OEM’s Industry 4.0 campaign to evaluate new technologies for the optimum support of workers in production and production planning.