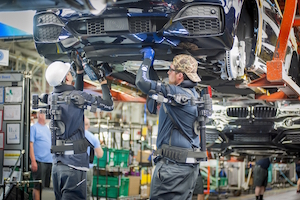 Germany – The OEM is cutting “ergonomically unfavourable and strenuous tasks” and enabling personnel to “apply their unique cognitive skills to the best effect”. By the end of 2017, it will use 60 lightweight robots, 230 smart gloves and 64 exoskeletons.

“The digitalisation allows the BMW Group to tap a growing range of options on how to advance the production system in many respects,” said Christian Dunckern, head of BMW Group Production System, Planning, Toolmaking and Plant Engineering. “People are more than ever becoming the designers of their own workplaces and can provide answers to the questions of an increasingly complex automotive production.”

Lightweight robots, of which 40 are already in use at BMW, offer the advantages of being relatively mobile and able to collaborate with human workers, with sensors rather than fences ensuring safety. The vehicle-maker commissioned its first such robot in 2013 at its Spartanburg plant, South Carolina, and “Miss Charlotte” is still in use today, installing sound insulation in car doors. In Germany, a ceiling-mounted robot in the axle transmission assembly at Dingolfing lifts the bevel gears and fits them to the gear wheels, while at Leipzig a robot spreads adhesive on front windows.

According to BMW, human and machine cooperation is now also possible with traditional, large-scale industrial robots. In the transmission installation area at Regensburg, Germany, one such robot is guided to the screw bonding station by a human worker, supported by a laser-based placement system. The high forces involved in the screw bonding process mean that this task is off-limits for lightweight robots.

Meanwhile, smart gloves enable improvements in process quality and ergonomics. A barcode scanner on the back of the hand cuts out the need to pick up a scanner, scan a part and return the scanner; scanning is triggered via a button on the index finger.

To take the strain elsewhere, exoskeletons are being deployed for the upper and lower body. At Spartanburg, 24 exoskeleton vests are used in series production, with 44 more to be added this year. The joints on the vests feature integrated mechanical spring support which boosts arm strength, helping workers to continue with tedious tasks. Eleven lower-body exoskeletons are in use at several German plants, where their chair-like frames improve workers’ posture and relieve the stress involved in positions such as crouching, or transform prolonged standing into sitting. The lower-body exoskeleton consists of moveable splints which can be fixed to the legs or torso then locked into different positions.

While highlighting its technology, BMW emphasised the importance of its human operatives, who determine how the technology should be applied. “In the time of smart devices and digitalisation, we must still keep an eye on the added value the applied technology offers to the company,” said Dunckern. “Nobody is better qualified to judge this than the people who actively shape our production system on a daily basis. This way, technology at the BMW Group actually serves the people and expands their creativity and efficiency.”