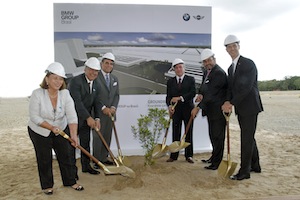 Brazil – The vehicle-maker is set to invest over €200m in the plant in Santa Catarina, which is BMW’s first in South America. The facility, comprising a bodyshop, paintshop and assembly line, will be able to produce up to 30,000 vehicles per year. Models will include: the Mini Countryman, BMW 1 Series 5-door model, BMW 3 Series Sedan, BMW X1 and BMW X3. The plant will have a workforce of 1,300.

BMW’s new Araquari operations will be able to draw on established structures at nearby Joinville. The company is currently setting up a training centre for the plant at Joinville’s Perini Businesspark, including an assembly line. BMW has said that it will source “numerous” components locally and build relationships with Brazilian suppliers early on.

Harald Krüger, member of the management board of BMW, responsible for Production, commented, “Our strategic principle of ‘production follows the market’ has previously proven effective in markets such as the US and China and will also ensure our success in Brazil as an important future market.”

Operations are scheduled to commence in autumn 2014.