"Think Blue” is the name of Volkswagen’s sustainability program, alluding to its aim is to increase fuel efficiency in each new vehicle generation by 10 to 15%, and that its aspirations to be ‘green’ will go beyond green to blue. The carmaker is matching its green vehicle development with efficient and environmentally-friendly paintshop processes and its Chattanooga, Tennessee plant was the first VW facility to be built with the ‘2010 process’ paintshop. This design emphasizes water recycling and uses dry scrubbing overspray recovery system, which allows 80 percent of air to be recycled.

"Air has to be the right temperature and humidity,” says Leslie Williams, Paint Assistant Manager at the plant, “Conditioning of air can be expensive. For us to be able to reuse that air saves a lot of energy because we don’t have to condition additional air drawn from outside.” 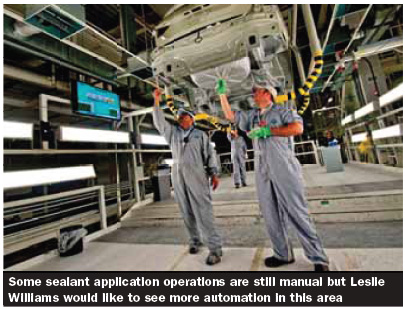 Intelligent automation
There are 105 automated and manual processes in the paintshop at Chattanooga and bodies come in to the facility at 110-second intervals, to go through five major steps: pretreatment, e-coat, sealer, base/clearcoat and wax application. Pre-treatment and e-coat are carried out with full rotation, bodies spending up to five minutes submerged in the tanks. There are 58 Dürr robots in the paintshop with Dürr atomisers, painting between 600 and 640 cars a day, running at a 34jph rate since 2012. There are some manual ‘decks’ in between the steps, for sanding and removing any contaminants, de-masking and some sealant application. And while Leslie Williams says that while some of the sealer step benefits from the ‘soft touch’ of an operator, “We would prefer to have more automation in the sealer area.”

VW has said in several corporate statements that by 2018 it wants to be the most sustainable automotive company, but what do its managers really think of these statements? Leslie Williams says: “Volkswagen leaders could have taken an easier route [to building a plant in the US] and used already-existing technology for some processes, but it wouldn’t have been as environmentally efficient.”

“I’ve worked for other automotive companies, and this is the first one I’ve seen take so many steps to not impact the environment,” she said. “I’m proud to be at VW. It has been a challenge; new people, new models and new technology, but we’ve taken the challenge on.” 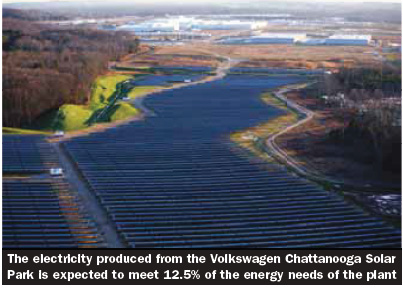 The solar park occupies 33 acres, or half of the 66-acre land area adjacent to the plant. The solar park contains 33,600 solar modules from JA Solar designed to produce 13.1 gigawatt hours of electricity per year – equivalent to the energy consumed annually by around 1,200 homes in the area. The electricity produced from the solar park is expected to meet 12.5% of the energy needs of the plant during full production and 100% during non-production periods. For Volkswagen, the solar park in Chattanooga will rank as its largest photovoltaic installation worldwide.

Unlike some companies that install solar facilities in order to sell electricity back to the power companies, VW will consume 100% of the electricity generated from the polycrystalline solar modules, that are mounted on a Unirac racking system. Ten SMA inverters will convert the solar energy from direct current (DC) to alternating current (AC) to be used to power the electrical installations in the manufacturing plant. Silicon Ranch will own the solar park and sell the electricity to Volkswagen under a 20-year Power Purchase Agreement and Phoenix Solar provided the engineering, procurement and construction services to build the solar park. 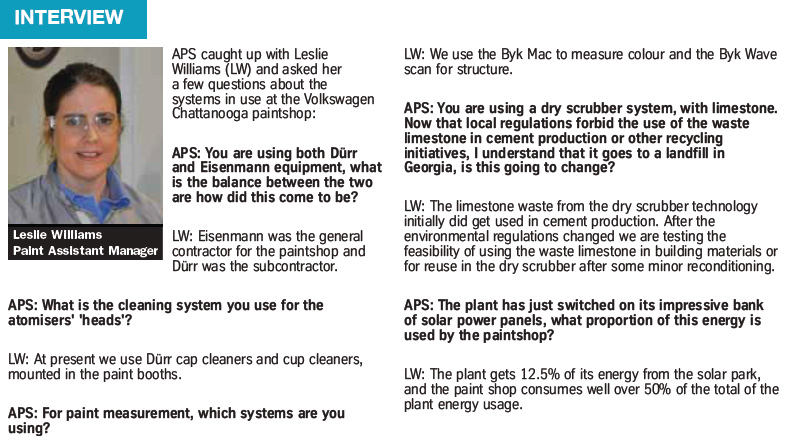