Big challenges off the road

The volumes may be lower and the unit size larger, but the logistical and manpower issues involved in off-highway manufacturing are similar to the automotive industry 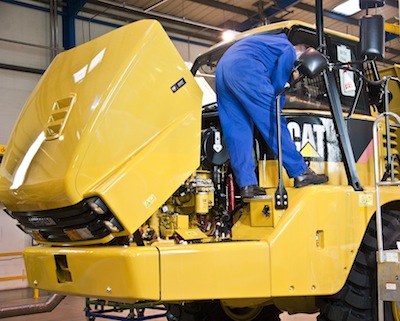 The manufacture of huge off-road vehicles follows many of the same processes found in automotive production. Most of these models are made using flow line processes with line-side kitting and sequenced logistics; the main difference comes in the sheer size and weight of the components and subassemblies.

The Caterpillar Peterlee facility in Durham, UK, is the worldwide manufacturing location for Caterpillar Articulated Trucks and currently produces a six-model range, four with different engine variants that tip the load and two which eject it. Phil Handley, facilities managing director, explains: “We make vehicles with a capacity starting at 25 tonnes right through to a 43-tonne machine. We have machines that we sell into regulated countries from an emissions perspective – tier 4 compliant machines – and we have machines that we can sell to the rest of the world where the emissions regulations are not quite as tight.”

Product variation is quite limited. Unlike their automotive counterparts, off-road vehicle manufacturers generally do not face the constant churn of new models on an annual basis which necessitates re-tooling and significant line changes. “Our cycles are very different from automotive models and lately they tend to be emissions driven,” states Handley. “We are just going through the launch of the tier 4 compliant product along with most of our competitors,” he says, adding that elements of a base model tend to be updated before a new generation is launched.

In addition to the narrower model range, paintshop is less taxing; the majority of construction equipment is yellow, although specific colour schemes for off-highway vehicles such as military camouflage are sometimes requested.

Scope as well as scale
Handley refers to the manufacturing philosophy at Peterlee as “flat plate to gate”, with only the drivetrain not manufactured on site. All the drivetrains feature Caterpillar components (gearboxes, axles and engines) that are brought into the plant in sequenced line-side deliveries.

“We receive flat sheet steel and then go through the standard processes where we cut, bend, weld, paint,” he explains. “We then have a single piece flow line where we assemble various models. It is not actually a physically moving line such as you would find in an automotive assembly plant, but we use product movers to index move the machine along the line as it grows.”

There is only a small amount of automation. “We use laser cutting technology and we use robots for welding,” says Handley. “We have an automotive paint plant, but that is not automated. There is more automation in the fabrication process as there are more repeatable processes that we can modular-build.”

When it comes to capacity, line speed and throughput, Handley is somewhat cagey. “We have got capacity in place that meets industry demand and we are continually investing in that capacity,” he states. “We are flexible with our working patterns; we can move people in and out of the process to match the seasonality or cyclical demand, so we can manage peaks and troughs with our process.”

Tackling the size issue
From an automotive perspective, the major difficulty with off-highway vehicles is their sheer size. “The scalability is certainly a challenge,” Handley says. “But you have to bear in mind that, compared to some of the large mining trucks that are manufactured elsewhere within the group, our product is not particularly large; you would fit our completed truck inside the body of one of those [trucks].”

Nonetheless, Handley admits that the scale of moving the parts is certainly a challenge. “But we make our own trolleys and stillages and we have huge cranes to move the components around,” he states. “The actual dump body sits on a special stand that can be raised by a fork-lift and moved to a required position.”

Along with the size and scale of the components, there are ergonomic issues to be addressed. “You need the people who are involved in the manufacturing process to be safe and to be able to move and manipulate heavy components,” explains Handley. “So that can become a challenge and we have had to develop some bespoke equipment that we use to fit various components to the machine.”

A further complication caused by the size of the vehicles, components and assemblies is the space needed for line-side logistics. When working on a flow line, modules need to be available at the right point and at the right time. According to Handley, some of the order-specific, sequencing activities where various options are matched with the product as it moves along the line mean that a large area is required. “We don’t have a lot of opportunity for things to go wrong as we are moving through the manufacturing process, as realigning products is difficult.” 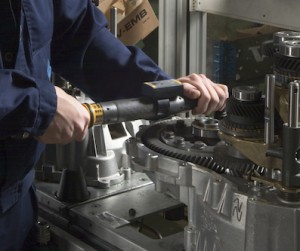 Manpower and ongoing needs
Another key challenge faced by Caterpillar and other heavy vehicle manufacturers is staffing. “Along with the process, it is the skills that are our biggest problem,” confirms Handley. This means attracting, developing and retaining the skills that are needed across the full range of positions: welders, fabricators, painters, electricians, manufacturing engineers and design engineers.

“It is quite a challenge attracting young, talented people into the industry,” states Handley. He believes the problem is particularly acute in the off-highway sector: “Maybe automotive companies don’t find it so difficult, but at this end of the market we do." He explains that heavy manufacturing is "not always viewed as an attractive career” because it is seen as a “dirty, dark and dank type environment” – but that this is far from the truth. Peterlee, for one, is a high-tech facility with a clean environment despite the heavy fabrication.

At the AGCO factory at Marktoberdorf in Germany, a recent installation of a Manufacturing Execution System (MES) was being hampered by incorrect data entry during the assembly process. The company opted to automate this activity using the Ubisense Smart Factory System. Over the 4,000m2 area, AGCO fitted 76 sensors and 200 real-time location system (RTLS) tags. By precisely tracking the tags on each gear assembly as well as on each subassembly, the company achieved real-time progress monitoring.

“Typically, manufacturers are relying on an operator manually typing in information on a workstation about the job in process,” says Terry Phebey, Ubisense vice-president of marketing. For instance, a gearbox assembly would come into the bay and at a quality control point a worker would have to type information into a terminal or scan a barcode. By instrumenting the area, AGCO was able to eliminate the human data input. The entry of the assembly into the space automatically sends intelligent data to the MES, entirely machine-to-machine.

“All that is required is that at the start of the process the tag is fitted to the part or assembly and an association is made between that part and the serial or bin number,” explains Phebey. “The Smart Factory System uses high-precision UWB real-time location technology combined with GPS for outdoor applications,” he adds. “Users only need three components: active (battery-powered) transponders or tags, designed for different applications; sensors; and software.”

The tags have a unique ID and can, for example, be associated with production data and transmit location radio signals to sensors, which detect the signals and calculate the positions of the tags several times per second. The Ubisense software stores, processes and displays the location data in real time for the user as well as generating events for IT or shop-floor systems.

Customers usually start with a small zone and just a few sensors as proof of concept, then, when they are happy with the ROI and quality metrics, the system is rolled out across the entire assembly process.

Harvesting the benefits of Smart technology

Another successful application of Ubisense’s Smart Factory System can be found in a North American factory that makes huge combine harvesters. A big issue that this operation faced was ensuring that transmissions were correctly filled with oil before leaving the assembly line.

“These machines have a gearbox on every driving wheel; each has at least four epicyclical gearboxes,” explains Terry Phebey, Ubisense vice-president of marketing. “When it gets into the final stages of assembly it is someone’s job to fill each of those transmission cases with oil to the right level. However, they were finding that in some instances only three of the four would get filled because the worker was not concentrating.”

There were occasions when a harvester was sold to a customer but seized up shortly after entering into service, thereby costing tens of thousands of dollars in warranty and recovery. “While it was a simple task in assembly, the severity of it not being carried out properly was very high,” says Phebey.

The objective was to error-proof the filling process by eliminating the human element. According to Phebey there was no possibility of automating the actual filling, and as inspection still involved employees a decision was made to automate the checking.

The solution involved instrumenting the station on the assembly line. “A tag was placed on the fill nozzle along with sensors around the work area,” explains Phebey. “With the software we can follow the nozzle around the space and record it to confirm that the nozzle visited all the gearboxes. The operator simply confirms by pressing the button that filling had taken place.”

This implementation worked reliably, so the company has now started to apply Ubisense’s Smart Factory System to other parts of the assembly process.