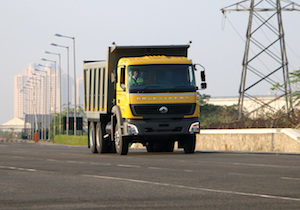 India – The milestone came fewer than five years after the introduction of the brand, which Daimler claims “has never been achieved by another market entrant in India before”. The country has traditionally been dominated by domestic truck brands.

BharatBenz was introduced to the market in September 2012 to cater to the medium- and heavy-duty segments. The brand reached 10,000 units in April 2014, then updated its medium-duty offerings in 2016 and its heavy-truck range in April 2017.

Before 2014, India did not feature in the top ten markets for Daimler Trucks; it is now the fifth most important worldwide, with 13,100 sold last year. Moreover, 10,000 trucks have been exported from the Oragadam plant near Chennai since the start of exports in June 2013, comprising BharatBenz, Mercedes-Benz and FUSO vehicles.

In 2016, exports doubled to more than 4,000. The number of export markets will increase from around 30 at present to 40 this year, including Asia, the Middle East, Africa and Latin America.