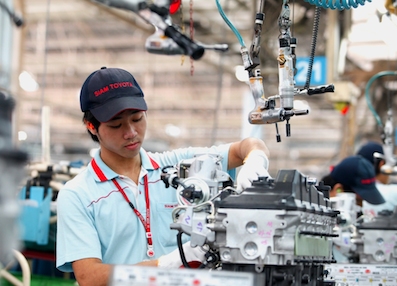 South East Asia has transformed itself from a backwater of protectionism to become one of the world’s vehicle manufacturing powerhouses and analysts believe there’s a lot more room to grow.

In combination, Thailand, Indonesia and Malaysia now build more vehicles than Brazil or India. Thailand is by far the biggest of the three, last year making 2.46 million vehicles. The country joined the top 10 of world automotive manufacturing countries on the back of its phenomenal light pick-up industry, which originally ballooned courtesy of a low sales tax to help its then agrarian-focused population get onto four wheels. Pick-ups like the Toyota Hilux, Ford Ranger and Mitsubishi L200 still form the backbone, but the focus is starting to shift more towards A and B-segment super-minis following a successful ‘eco car’ campaign to get more makers building and sourcing parts in Thailand in return for generous tax incentives.

Great potential for Indonesia
That model is now being copied in the still relatively untapped market of Indonesia, which has already seen a huge growth in manufacturing, from a completely CKD industry back in 1997, when just 224,000 vehicles were assembled in the country, to 1.21 million in 2013. Back then long-time dictator Suharto was trying and failing to establish a national car using Kia models imported tax-free by his son, but with Suharto long gone the emphasis is now firmly on tempting foreign OEMs to invest. The local vehicle market last year topped 1.23 million, fast catching Thailand’s 1.32 million and with far greater potential given its population of 250 million against Thailand’s 67 million.

“Indonesia still has room to grow – car penetration there is among the lowest in the region,” says Jessada Thongpak, senior analyst at IHS Automotive focusing on light vehicle production in the region. According to IHS figures, that penetration is just 45 cars per 1,000 population, against 145 per 1,000 for Thailand and 200 per 1,000 for Malaysia.

Malaysia to focus on low-emission cars
Sandwiched between the other two, Malaysia (population 29 million) is not experiencing nearly the same growth in production thanks in main to its focus on its two domestic makers, Proton and Perodua. Last year the country produced a record 601,407 vehicles, the majority cars, and despite investment from the region’s two big players – Toyota and Honda – growth from 2007’s 441,661 figure has been steady rather than dramatic. Malaysia hopes to change that, and announced in January that it would follow its neighbours by introducing a tax-friendly atmosphere for any company wanting to build low-emission small cars.

However, IHS doubts the government will hit its target of 1.2 million cars per year by 2020. “I don’t think other foreign OEMs will invest in Malaysia due to the fact that the major OEMs are all heavily invested in Thailand or Indonesia for subcompact or low-cost cars,” explains Thongpak. On the other hand, IHS predicts that Thailand will hit 3 million vehicles produced per year by 2018, with Indonesia reaching 1.5 million by 2017 and a potential 2 million by 2024.

It’s not just the vast local market Indonesia wants to satisfy; the government there also wants to emulate Thailand’s export success. Last year Thailand shipped out 1.2 million vehicles, or 46% of those built. Combined with automotive parts exported, that earned Thailand the equivalent of $22 billion last year. “You need at least 30/40% export to become a main driver of growth,” states Thongpak.

Thailand’s pick-ups go around the world, including Europe, and the country does well with rough-tough SUVs based on those pick-ups, such as the Toyota Fortuner, Ford Everest and Chevrolet Trailblazer. Exports of frugal super-minis built under the eco-car schemes such as Nissan’s March (Micra) and Mitsubishi’s Mirage are also big.

The cars are built to a range of emissions and safety standards – Thailand is Australia’s second biggest source of cars after Japan and the country is Honda’s main market for its Thai output. Ford’s second factory in the country’s main automotive hub of Rayong builds global cars such as the Focus, and the company announced at the start of its build in 2010 that 85% of cars produced there would be exported.

MPV target market
Indonesia’s industry so far has been more inward looking, last year exporting 276,000 vehicles and kits from its factories. Where Thailand has its pick-up, the dominant vehicle type in family-oriented Indonesia is the 7-seat MPV and more makers are gunning for market leader Toyota with cars built in the country. The Japanese are utterly dominant, and Chevrolet, with its 1.2% market share in 2012, has a way to go with its new Spin supermini 7-seater which is built to the east of Jakarta, where the majority of automotive manufacturing is centred.

Also targeting that market is Nissan’s new budget brand, Datsun, whose locally built Go+ will also offer seven seats on a stretched small car platform when it goes on sale later this year. The regular Nissan Go hatchback will be an example of the small, low-emission car Indonesia wants automotive OEMs to build as part of its Low Cost Green Car programme. Reuters last year estimated that makers like Toyota, Honda and Daihatsu have spent $3 billion already on production of local versions of Japanese ‘Kei’ cars to which locals can upgrade from the ubiquitous motorbike.

According to Thongak at IHS, the benefits are low taxes both for the manufacturer and the consumer, a model copied from Thailand. Phase 2 of the eco car programme in Thailand, which has just been announced, imposes even tougher conditions on makers in return for 14% excise tax (compared to 30-50% for regular cars) and cuts import tariffs for machinery and any parts unavailable in Thailand. The manufacturer must spend at least $200m on building a new plant with a capacity of 100,000 within four years, with much of it made from local content. Cars must have engines of less than 1.3 litres, economy of 62mph or better and emissions below 100g/km.

Eco-car production to grow
The government has said it expects annual eco-car manufacturing to soar by 60% because of the programme, with 700,000 made so far between 2010-2013 (over 50% Nissans). Mazda is one company reported to be interested in signing up. The goal once again is to increase exports, which are vital in a nation with Thailand's political uncertainty. The country bounced back strongly from the terrible flooding in 2011 that hit those suppliers and manufacturers like Honda situated to the north of Bangkok in Ayutthaya. But political unrest is far more common, and the current wave of anti-government protests is a big reason the already wobbly car market fell in December, with passenger cars dropping 45% compared to the same month in 2012 and production falling 34%.

IHS now predicts that growth will reverse this year, with production down slightly to 2.41 million vehicles. Honda’s executive vice-president, Tetsuo Iwamura, told reporters in late January that Honda expects demand for cars to drop 14% in Thailand this year, while sales in Indonesia will be flat. Honda vies with Toyota for dominance of local car sales in Thailand and recently announced a second plant that would take its capacity to 420,000 in the country by 2015.

Middle-income trap
It is hoped that exports will keep factories busy, but the Thai government is also keen that car manufacturing will be “one of the main industries rescuing Thailand from the middle income trap”, as it stated in the Thailand Automotive Industry Master Plan 2012-2016. Some economists believe Malaysia has already fallen into this trap, where wages rise too high for the country to appeal to manufacturers as a low-cost base but not enough money is spent on skills or education for it to become a centre of innovation. Thailand’s wages have risen and Thongpak at IHS warns that a skills gap needs to be addressed. “Thailand does have a labour shortage. That’s something the government and the education sector need to work on,” he says. 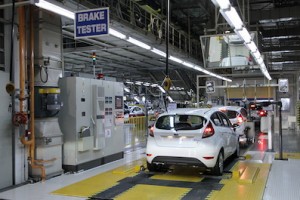 To satisfy the richer end of the growing middle class, there are small but well-established assembly operations by premium makers in the region. BMW first started assembling cars from kits in Indonesia from 1976 with the 520i, and now puts together the 3-series saloon at its plant near Jakarta. It has a bigger operation in Thailand, making the X1 and X3 SUVs, as does Mercedes. Amazing as it sounds, Volvo was one of the first manufacturers to enter Malaysia, its assembly plant one of six given approval in 1967. The Swedish company is still building cars in the country and has recently upgraded the factory to start assembling completely knocked down kits from the previous SKD kits, with a goal of producing 4,500 cars a year by 2015.

There are further roadblocks to automotive growth – a big one being the terrible traffic which blights the region’s mega-cities. The mayor of Jakarta has already spoken out against the government’s plan to grow the small-car market, describing it as unsustainable given the dwindling road space. But with the number of middle-class and affluent consumers (so-called MACs) in Indonesia predicted to rise to 141 million in 2020 from 74 million in 2012, according to figures from analysts the Boston Consulting Group, and with Thailand’s deft establishment of itself as an export hub, the future of South East Asian manufacturing looks very promising indeed.