Vehicle-makers are starting to realise the potential of using AR to improve productivity and quality, but how does the technology work in practice? AMS takes a look at some of the pioneering products now available 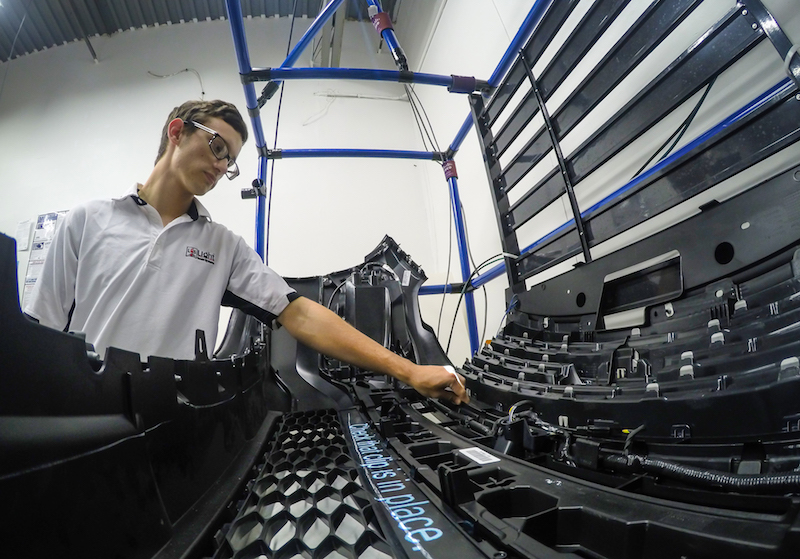 More companies around the world are developing augmented reality (AR) technology to help automotive manufacturers in their ongoing quest for increased efficiency and productivity, and several major OEMs have now woken up to its potential. For example, BMW has recently begun to use AR for a range of applications, including early-phase concept validations, initial sampling inspections and tool acceptances at suppliers, as well as in the maintenance of running systems.

One company leading the way in the application of AR technology to the automotive industry is DAQRI of Los Angeles, California, which manufactures ‘Smart Helmet’ and ‘Smart Glasses’ devices suitable for a wide variety of tasks, including training, work instructions and assembly-line visualisation. According to spokesman Michael Miller, the company has worked on proof of concepts with Emerson, Parker and Vinci and carried out AR case studies with Siemens. Although unwilling to disclose details, he reveals that DAQRI has also engaged in “a number of successful early-stage projects” with automotive manufacturers and has some “very exciting larger programmes underway, particularly in the area of plant maintenance and training”.

Another pioneer in the sector is NGRAIN of Canada, which has developed technology that allows manufacturers to automatically and accurately assess the quality of assemblies using a combination of 3D scanning and photo imagery hardware. According to Barry Po, senior director – product and business development, the technology employs a cutting-edge artificial intelligence engine which uses 3D scans and photographs to identify potential defects or issues “before they become expensive to fix”.

“Instead of inspecting an assembly by hand, which is how it's almost always done today, we equip technicians on the floor with 3D scanners and cameras, which they use to take scans of the assembly in question. The 3D scan is processed by our software, which then outputs a result that can be used to determine if an assembly meets a standard or not,” he explains. “What we offer might be better classified as an application of ‘mixed’ reality, rather than purely augmented reality, because we can turn the results over onto mobile devices, tablets, laptops and desktops with no special eyewear required.”

After working alongside a number of automotive companies, including some which need to inspect panels containing dozens of rivets, Po realised exactly how time consuming and labour intensive manual inspection can be, and how difficult to do consistently. Although he admits that NGRAIN is “relatively new” to the automotive manufacturing world, with roots in aerospace and defence, he stresses that there are “lots of similarities between the manufacturing processes used in aerospace and the ones used to manufacture automobiles”.

‘There are certainly other applications for AR in auto manufacturing. In addition to visual inspection, I would say that worker training, for example, through the presentation of work instructions on a mobile or wearable device, is another strong use case that we’ve certainly seen in recent years. AR also provides a medium to accurately visualise measurements that might be too hard to judge by hand,” he says. While the main benefits of AR depend on the situation, “in general, AR makes it possible to manage the risks associated with mistakes that are easy to make in manufacturing today”, Po states.

Guiding OEMs to greater accuracyElsewhere, Michigan-based Light Guide Systems has developed AR technology that uses projected lights to error-proof and streamline manufacturing and assembly processes in a number of industries. Indeed, Paul Ryznar, founder and CEO of the company, says that the automotive industry forms its largest customer base, with about 200 installations so far and projects currently underway with six global OEMs and eight tier-one suppliers.

The LGS product employs a digital projection technology which overlays a virtual operating ‘canvas’ onto the work surface. It features a combination of visual and audio cues and specialised tools that work together with in situ equipment such as machine-vision cameras and torque wrenches.

“The automotive factory of the future will be fully AR-enabled, with many day-to-day operations being carried out through AR as the key user interface” – Michael Miller, DAQRI

“Automakers are finding the technology particularly valuable to simplify the increasingly variable production processes required by today’s flexible manufacturing requirements,” he says. “Essentially, AR technology makes complex processes simple by placing the right information in the right place at the right time, and can be used to dramatically improve processes for automotive manufacturers.”

In Ryznar's view, AR technology is “particularly useful” in the automotive industry because vehicle-makers and suppliers “manage a great deal of product variation within short cycle times, often building parts for multiple vehicles on the same line”. In addition to ensuring that the correct parts are put together in the right way and in the right order, another benefit is that AR guidance systems can be portable and used in combination with the equipment already on the shopfloor.

Tools like programmable machine-vision cameras, laser trackers, collaborative robots and torque guns can be integrated into the system to confirm that tasks such as pipe alignment, bolt sequencing and tightening are performed correctly. Another useful function of the LGS system is its ability to place blueprints, instructional videos and even a virtual tape measure directly onto the work surface in front of the operator.

“A common challenge for automotive manufacturers in particular is the high degree of variation between similar components. The differences in the parts are often subtle but have a large impact on functionality and can translate into costly mistakes when mislabelled or misidentified,” explains Ryznar. “Factories are maximising their return on assets by placing more product variations onto tooling that used to be dedicated to only one variation."

He continues: “LGS’s ability to fully document and trace each part built by creating a digital ‘birth certificate’ optimises the process while simultaneously increasing product traceability. That means that we are one step closer to guaranteeing every item is built perfectly, every time.”

Ryznar highlights several other benefits, including elimination of the “training variation” inherent across multiple trainers through the implementation of standardised, AR-based training; the ability to project visual information about timing, alerts, next steps and process tips; and the elimination of paper or monitor-based work instructions. 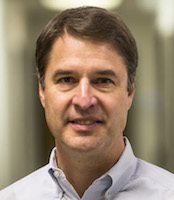 “One of the biggest areas that we have been able to assist our automotive clients in has been part kitting and picking. While we often focus our attention on assembly or inspection instructions, the focus on kitting has yielded some of the most dramatic results,” he says. LGS is able to visually guide the operator to the location that he needs to pick from and verify his action without additional steps or confirmations. One OEM in particular has focused on this area and “performed several studies resulting in building Light Guide in as the standard for kitting processes”, says Ryznar.

“At a high-level, the studies have consistently shown significant error reduction, in the order of 80%, as well as a reduction ranging from 35-50% in the time to complete the picking operation,” he states.

Visualising the futureLooking ahead, NGRAIN’s Po predicts further growth in the use of AR technology in the automotive industry, particularly as manufacturing processes “continue to improve and the infrastructure for manufacturing evolves”. As for the supplier of the technology, he says: “We're driven by what’s important to customers in this space – automating mundane, highly repetitive work, and freeing talent up to work on only high-value tasks that require the attention of a human being.” Soon, he believes, “cameras and sensors that used to be the realm of specialised hardware companies will become accessible to just about everyone”. 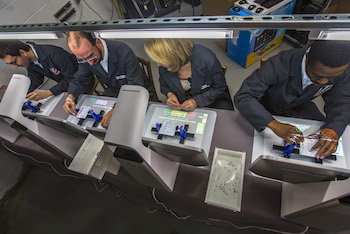 Using augmented reality, personnel can receive work instructions while keeping their eyes on the task at hand

For LGS’ Ryznar, the shift away from monitor-based or written work instructions will continue to be a “big trend”, since the old method of viewing instructions on paper or screens “is cumbersome and requires operators to place their attention on directions as opposed to the work at hand”. He says: “It makes sense to focus an operator’s eyes on the task they are completing, which is why step-by-step guidance with projected lights is such an effective way of improving efficiencies.”

Meanwhile, DAQRI’s Miller observes that many automotive manufacturers now see AR as a key means of optimising production operations, maintenance and training, and predicts continuing innovation in the use of AR to visualise and enhance functions which support these activities, such as work planning, equipment maintenance, shopfloor monitoring and optimisation. “We believe the automotive factory of the future will be fully AR-enabled, with many day-to-day operations being carried out through AR as the key user interface, with real-time access to data and information for the worker at the right time and in the right place,” he states.