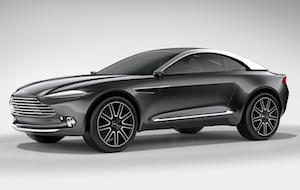 UK – St Athan will be the vehicle-maker’s second manufacturing location after Gaydon, which will also receive some of the £200m total investment in new products and facilities. The St Athan plant will make Aston Martin’s new crossover, while Gaydon will handle the next generation of sports cars plus the all-electric RapidE to be made from 2018.

According to CEO Andrew Palmer, Aston Martin conducted “a detailed evaluation” of more than 20 sites before selecting St Athan. Covering 90 acres, the new manufacturing complex will re-purpose facilities which are currently used by the Ministry of Defence. Three existing hangers will be transformed during the construction work, which is due to commence in 2017 and finish in time for vehicle production from 2020.

According to Aston Martin, St Athan will be the exclusive production location for its new crossover, with more than 90% of the output earmarked for export to markets with growing demand, such as the US and China. The maker debuted a concept crossover called DBX early last year.

At Gaydon, this autumn will see the production launch of the new DB11, a replacement for the DB9 and the first car to be launched under the company’s ‘Second Century’ plan, in which its entire range of sports cars will be replaced and expanded. Capacity at Gaydon will grow to 7,000 units per year by 2020.

Aston Martin’s expansion is expected to create up to 1,000 jobs across the two sites, and a further 3,000 in the supply chain.