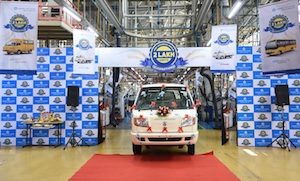 India - The company recently announced that the 200,000th light commercial vehicle (LCV) rolled out of its Hosur plant in the Krishnagiri District. The facility has been making LCVs since the launch of the Dost in September 2011.

"Having 200,000 Ashok Leyland LCVs on the road in about six years is proof of the trust that our customers have placed in us," commented Nitin Seth, president of LCV at Ashok Leyland. "For us, this milestone is the beginning of our next growth chapter where we focus on bringing in more LCV products in the market and by increasing the share of LCV exports by making left-hand drive vehicles to enter other markets."

The company achieved its highest ever LCV sales record in FY2018, with 43,441 units sold. This marked a year-on-year rise in demand of 37%. It also launched the Dost + LCV back in September 2017, and Seth suggested that Ashok Leyland would further expand its Dost lineup in the near future.