Allies at a crossroads

While boardroom scandal and criminal allegations have tested this longstanding partnership, the ties that bind the Alliance OEMS remain firmly in place 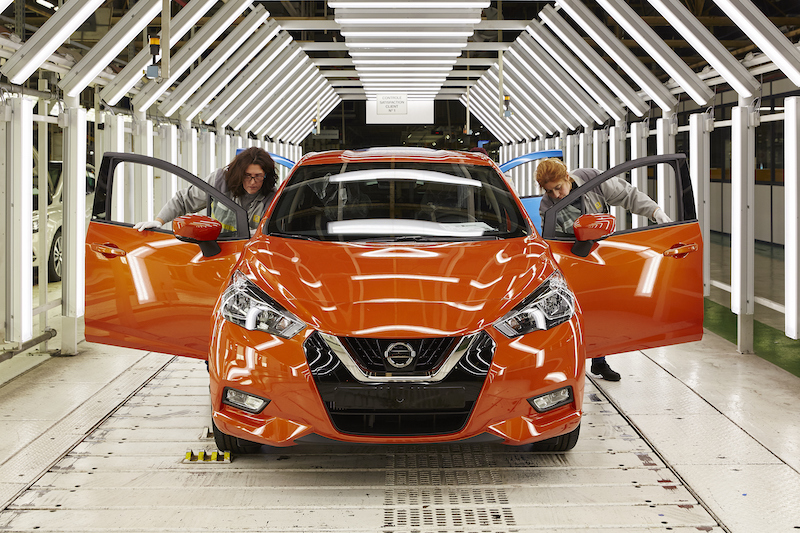 With the arrest in late 2018 of Carlos Ghosn, the man who has led the turnaround in the fortunes of both Renault and Nissan in recent years, leading to the worldwide alliance between the two companies, the Renault-Nissan Alliance is very much at a crossroads; and with Nissan owning a controlling 34% stake in Mitsubishi and Daimler also involved through minority cross-shareholdings and a number of joint programmes, Ghosn’s arrest will be felt in several boardrooms across the industry.

Initially the French government and Renault appeared to back Ghosn, issuing supportive statements and initially insisting strongly that he would remain in charge. Renault quickly announced that no evidence was found in France of the improper payments alleged in Japan. However, as his detention has been confirmed in a succession of court appearances in Tokyo, and with the Japanese legal system seemingly unbending in its refusal to allow bail, so common in similar cases in Europe, both the French government and Renault appear to have backed down. Ghosn resigned as chairman and CEO of Renault in the last week of January. The OEM’s board named the outgoing Michelin boss Jean-Dominique Senard as chairman and Ghosn’s former deputy Thierry Bolloré as chief executive.

With Mitsubishi now joining Nissan in alleging financial misdemeanours, the charge sheet against one of the most famous men in the industry is growing steadily. This is not a case likely to resolved quickly.

Meanwhile, the French head of production planning for the alliance, Phillippe Klein, has insisted that product plans continue as before; this is not surprising as both Renault and Nissan will have made significant progress with new vehicles, either alone or together, and irrespective of the legal uncertainty surrounding Ghosn, the business needs to continue. Pragmatism will rule.

Renault and Nissan had begun their now wide-ranging alliance and cross-shareholdings arrangements in 1999. Renault holds 43.4% of Nissan while Nissan holds 15% of Renault; the two companies have 50% each in the Renault-Nissan BV Dutch holding company which has a board made up of executives from each company. It is through this vehicle that Mitsubishi and Nissan allege that Ghosn received close to $9m improperly. Nissan also has a 34% stake in Mitsubishi, a ratio which under Japanese law gives it effective managerial control without having to take a 51% stake. In 2010, the Renault-Nissan Alliance took a 3.1% stake in Daimler; meanwhile, Daimler took a 3.1% share in each of Renault and Nissan.

Since 1999, AvtoVAZ and Samsung Motors (80% held by Renault since 2000) have also become part of this new and evolving structure. Regarding AvtoVAZ, this is owned by Alliance Rostec Auto BV, a joint venture between Renault and Russian company Rostec. Renault owns a controlling 67.61% stake of in this JV, and as Renault holds more than 50% of AvtoVAZ, it is treated as a subsidiary of the French company for accounting purposes.

Numerous shared activities covering new vehicle platforms, manufacturing and logistics operations and back-office functions have evolved. Such has been the success of these ventures that together Renault-Nissan-Mitsubishi sold just over 10.6m vehicles in 2017, making it the second biggest automotive group worldwide, behind VW (10.7m) and ahead of Toyota (10.47m). In June 2018, the Alliance reported that it had achieved synergy savings for 2017 across the Renault, Nissan and Mitsubishi brands of 5.7bn euros, a 14% rise on the synergy savings from 2016, in large part reflecting the first full year of Mitsubishi’s presence within the Alliance. Not satisfied with this, the aim is to reach 10bn euros of savings by 2022; and to achieve this, efforts at greater alignment in aftersales, quality and customer satisfaction, and business development processes were intensified in the second half of 2018.

With Mitsubishi now a fully-fledged member of the Alliance, it is not surprising that H1/2018 produced another set of record results, with sales of 5.54m vehicles, suggesting that 2017’s total will be surpassed. The Alliance aims to achieve combined sales of 14m by 2022, a 30% rise on 2017.

The integration of Mitsubishi into the group has broadened the international spread of its business. China is now the Alliance’s no.1 market, followed by the US (despite the absence of Renault from this market). France is no.3, followed by Japan at 4 and Russia at 5. And the Alliance also has an enhanced position in much of ASEAN and also Australia and New Zealand through Mitsubishi.

The scope of the Alliance has intensified since Nissan took its 34% stake in Mitsubishi. Examples of this include: 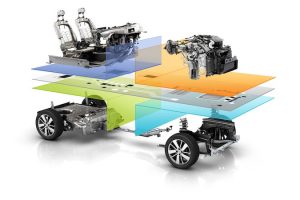 In addition to the synergy cost-savings, the Alliance wants to increase sales to over 14m pa (its target for 2022), of which at least 9m would be built using four common platforms, including one for electric vehicles; in addition, common powertrains would achieve 75% penetration across the brands, up from one-third today. Future plans for the Alliance do not just cover vehicle development and production, but also new technology and services, as noted below:

Renault-Nissan-Mitsubishi will work with Google on intelligent infotainment systems; this will offer customers a new range of in-car services, including Google Maps, Google Assistant and the Google Play Store. This system will be combined with the Alliance’s existing cloud-based remote software upgrade and vehicle diagnostic systems.

In addition, the Alliance has also begun to invest in new technology ventures, including the following in the last year:

Shared manufacturing and design concept at the heart of the Alliance

Renault and Nissan’s product and manufacturing co-operation centres on shared CMF (Common Module Family) programmes, covering the B, C and D segments; the best-known and biggest programme here is the CMF-C/D platform underpinning the Renault Megane, Scenic, Kadjar, Koleos, Talisman and Espace, the Nissan Qashqai, X-Trail and Rogue and the Samsung QM6 (sister vehicle to the Korean-made Koleos). Similar programmes cover the A- and B-segments; the Renault Kwid and Datsun Redi-Go small SUVs are made on CMF-A, while from 2019 the Renault Clio and Captur and Nissan Juke will be produced on the CMF-B platform, with the third generation Dacia Sandero and Logan adopting this programme in 2020. The Nissan Micra will also switch to CMF-B around this time. A new B-segment Mitsubishi model will adopt the CMF-B shortly after 2020. The 4th generation Mitsubishi Outlander will adopt the CMD-C/D platform in the early 2020s.

The CMF approach allows designers to combine standard engine compartment, front and rear under body structures, and cockpit designs to create differently-sized vehicles within each segment. The modular approach is intended to generate a 30-40% saving in each vehicle’s development costs and a 20-30% saving in part costs.

Integrating Mitsubishi into the Alliance

It did not take long for Mitsubishi’s to play a role in the Alliance. In April 2017, a new combined Renault-Nissan-Mitsubishi LCV business unit was founded. This focuses on merging Renault’s van expertise and Nissan’s truck production, along with Mitsubishi’s expertise in pick-ups and utility-oriented SUVs. The overall aim is to have one business unit with three brands having enough “space” to differentiate themselves while maximising the use of development, technology and manufacturing resources.

In future this will bring Mitsubishi’s expertise to the development and manufacturing of Nissan’s body-on-frame SUVs, especially the US-market Armada and the internationally oriented Patrol. Nothing definite has been decided or announced regarding whether a Nissan (NP300) or Mitsubishi (L200) base will be used for future pick-up models. Certainly, only one platform would be required here for the combined operations.

In addition, Mitsubishi will benefit from existing programmes; the first of these will see the Renault Trafic made as a Mitsubishi for sale in Australia and New Zealand (markets where Mitsubishi has a very strong presence in cars and SUVs/pick-ups, but without a suitable van) from 2019 onwards, adding volume to the Sandouville factory which will lose Opel/Vauxhall volume from mid-2019.

As well as Renault and Nissan working together, how the Alliance’s co-operations with Daimler have grown clearly show the diverse range of ways in which it has grown and spread into very different segments. There are over a dozen major projects in action now, across Europe, Japan and Americas. These are set out below: