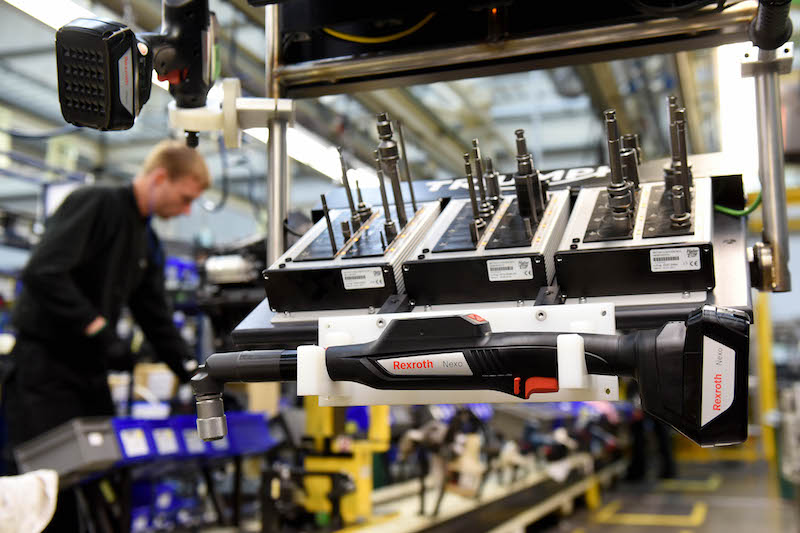 Interactive workstations that tell assembly workers which tasks they should be performing, ensure they perform them correctly, and report back to a central control system are now a fact of life in the manufacturing sector. These capabilities tend to be associated with dedicated, expensive hardware and complex software but, in line with the tendency of IT-enabled operations to combine ongoing performance improvements with decreasing costs, that association looks set to become increasingly tenuous.

One example can be found at the Hinckley, Leicestershire, factory of Triumph Motorcycles, where 700 people are employed. The company has implemented a low-cost but high-capability system using ‘intelligent’ workstations, enabling it to replace cumbersome physical operations driven by paper-based instructions with much more streamlined procedures supported by integrated, IT-enabled and failsafe operator guidance techniques. To do so, Triumph worked closely with manufacturing system supplier Bosch Rexroth, and what was originally a bespoke solution has now become a commercially available product.

“All we really have to do is find out what tools will be needed at a particular station… what torque level they want from a tool and whether they would need pick-to-light, trays to pick parts from and attachments for the tools”– Stuart Williams, Bosch Rexroth

Stuart Williams, emerging technologies manager for Bosch Rexroth in the UK, explains that production at the Triumph plant has a number of distinctive characteristics. One is that it involves the processing of small batches in which it is quite feasible that each unit will be different in some respect from the others. Another is that it is heavily reliant on manual procedures, particularly for the tightening of nuts and bolts, in which ensuring the right torque setting is a crucial requirement. Taken together, these two factors generate a third: a need for multiple types of small components to be available at the lineside, from which operators must pick the right part and carry out the correct procedure to enable the growing motorcycle assembly to be moved to the next stage of production.

The new dolly system helps workers to select the correct tool bit, by means of socket nests and LED indicators

Before Triumph and Bosch Rexroth got together 18 months ago, satisfying the demands created by these interlinking factors required a combination not only of paper-based instructions and large amounts of lineside components but also a lot of tooling, not least hefty pneumatic wrenches. So, besides the potential for an operator to select the incorrect component, various air hoses leading to each workstation created a cluttered shopfloor that did not fit with Triumph’s self-image as a producer of sleek, fast machines.

A spokesperson for Triumph admits that the situation was unsatisfactory: “The manual assembly systems on the engine assembly line had the potential to increase the risk of production delays due to rework. Our ultimate goal was to reduce this rework time significantly.”

Taking inspiration from ThyssenkruppThe potential solution became apparent when a team from Triumph went to look at how another Bosch Rexroth customer had dealt with a similar situation. At the Thyssenkrupp plant in Heilbronn, Germany, an operator guidance system (OGS) had been installed on a line assembling body components for Mercedes-Benz. Each workstation incorporates a graphic display demonstrating a process to the operator, together with the items to complete it.

For Triumph, it was a ‘light bulb’ moment. The company decided to use its engine assembly line as the pilot project, since this production area has the greatest number of bolting operations in which ensuring the correct torque is critical to product quality.

But it was still necessary for Bosch Rexroth to come up with a solution that satisfied Triumph’s specific requirements at a cost that was within the company’s budget. Williams explains that Triumph’s business model, which requires a high number of product variants to be on the line at the same time and features multiple assembly operations, has implications for the way workstations function. Each station has a takt time of four to six minutes rather than the much shorter time commonly found in automotive environments, which can be as little as 45 seconds.

The challenge Bosch Rexroth faced was to come up with a system that provided a high level of capability while avoiding the costs normally associated with meeting such demands. Previous systems have tended to be based on industrial PCs, programmable logic controllers and complex control and data acquisition software. The company had to create a system that complied with stringent specifications, including that it should:

• run in the Windows 10 operating environment• incorporate a hardware platform based on an inexpensive, single-board computer• use standard mains power• possess wi-fi connectivity• piggyback onto the company’s existing network• be managed by the existing IT department.

But, Williams continues, Triumph’s ambition was also to create much more ergonomically efficient workstations and this required that the OGS be used to support the operation of new assembly tools, in this case Bosch Rexroth’s cordless DC Nexo handheld tool range. These technologies were put together in the first stage of the project between the two companies, then implemented on six workstations in the engine assembly area with some further refinements such as the replacement of barcodes with RFID tags to communicate assembly instructions.

Getting assembly right first timeIn the new set-up, the screens, tools and tool trays are all accommodated on a dolly, which the operator moves along the line and positions in the most appropriate location to enable them to view the screen information and then select the correct tool and corresponding tool bit. To further facilitate right-first-time procedures, each individual drive bit is housed in a separate socket nest and the operator is shown which one to select by LED indicators adjacent to each tool storage compartment in the trays. “Once a job number comes in, the system itself selects the right tool and program for the job,” says Williams.

The OGS written for Triumph incorporates production control, which means that a workpiece cannot move on to the next operation without operator approval. In addition, Williams says, the system has a “rework capability”. The system will, he explains, “automatically select the right program if it gets a ‘not okay’ from a tool”. 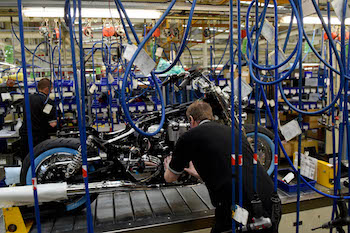 The Bosch Rexroth project cut the number of dangling cables

Triumph confirms that this set of procedures has swept away the old pneumatic tools with their dangling hoses, along with the risk of incorrect tool selection. Across the six workstations modernised so far, just 12 tools along with their attachments are now performing all of the functions for which around 180 tools were needed before. Data is automatically transmitted to a receiving station via a wireless connection, thereby creating a clear audit trail of every process.

Triumph says it has achieved the goal of ‘no fault forward’ and that similar systems will now be rolled out across other areas of the production line over the next few years.

Customising a standard solutionMeanwhile, Williams reiterates that this whole package of capabilities is based on standard hardware and software modules, which can be customised to the requirements of a particular user in a matter of hours. “There is no code to be written,” he states. “It is all click-and-configure.” It is a basic principle of Bosch Rexroth’s approach to the market that customers should be able to achieve implementation ‘out of the box’ using their own resources. “We provide training to enable users to own the process themselves, but we have yet to take more than four hours before we can hand everything over to them,” he states.

He says it is not necessary for any detailed process analysis to be carried out beforehand: “All we really have to do is find out what tools will be needed at a particular station. So, we would need to know what torque level they want from a tool and whether they would need pick-to-light, trays to pick parts from and attachments for the tools. The hardware is the only thing that needs to be specified.”

Data communication from the workstations to a central management information system is similarly free of any need for dedicated networking. “The software sits on top of the users’ corporate IT platform,” Williams states. In this way, he concludes, manufacturing companies can now gather, at shopfloor level, the data they need to create a ‘big picture’ of what is happening across the business as a whole using a combination of off-the-shelf hardware and straightforward programming routines that would have been unthinkable just a few years ago. The software already has at least one other automotive industry customer.