A hybrid of fortune at Toyota Europe 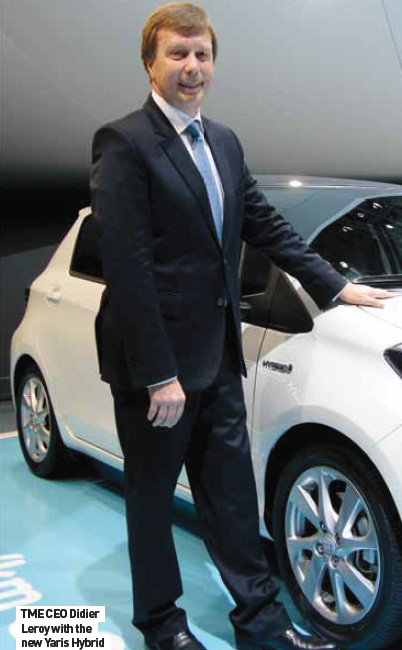 Speaking at the recent Geneva Motor Show, Toyota Motor Europe CEO Didier Leroy admitted the Japanese carmaker has had a torrid time of late. The combination of global recalls, the Japanese earthquake and tsunami disaster and the flooding in Thailand, had all combined to seriously affect both consumer confidence and vehicle production.

But Leroy said that the company was closing that chapter of its history with the introduction of a range of new models and future concepts which will feature some of the most advanced powertrains currently used by any mass-production carmaker. Having started production of the Auris Hybrid at its Burnaston, UK facility in 2010, which Toyota claims is the first mass-production hybrid model to be manufactured in Europe, the Yaris Hybrid has now joined production of the petrol- and diesel-powered model versions at the company’s plant in Valenciennes, France.

AMS: Does production of the Yaris Hybrid in Valenciennes have the same set up as the Auris Hybrid in Burnaston? Hiroyuki Ochiai: [It is] basically the same, although the Yaris is smaller than the Auris, which means that the related equipment might be smaller. The systems and the overall equipment is almost the same as at Toyota Motor UK (TMUK).

AMS: Did you learn anything from the hybrid installation at Burnaston? Did you have the chance to correct any mistakes?

HO: We have produced hybrids for a long time in Japan, so the equipment has been matured through this long experience. We basically transferred our expertise from Japan to here. [The Yaris Hybrid] uses the same basic concept, with few modifications. At TMMF (Toyota Motor Manufacturing France), there are no overwhelming concerns surrounding how the equipment and hybrid production will affect overall vehicle production.

Ochiai is a manufacturing expert who joined Toyota in 1979. During his career he has held management positions Toyota’s Kamigo and Shimoyama factories in Japan and at Toyota’s factory in Kentucky in the USA. Until his appointment, Ochiai was general manager of project planning and management at Toyota in Japan.

AMS: Was manufacturing equipment brought directly from Japan or was that sourced locally?

HO: Equipment for hybrid production was all brought from Japan.

AMS: How closely did you work with the hybrid powertrain design team in order to address manufacturability of the Yaris Hybrid?

HO: In preparation for manufacturing we always discuss this type of productivity and manufacturability with the design side and then design applies our ideas; some ideas relate to reliability of equipment, workability of equipment. All concerns were discussed before preparations were put in place for the hybrid. Of course, before installing the equipment the production engineering chief discussed the issues surrounding workability [and] manufacturability, with design.

AMS: What kind of testing did you put in place, considering that the Yaris Hybrid will be built on the same line as the standard car? I guess there are new assembly stations for application of the battery packs, etc, but you must still have to test for flow, the model mix and any related blocking?

HO: [Valenciennes] already has a flexible line, so to introduce the Yaris Hybrid we just had to install some new equipment for installation, some of which was modified for commonisation. Even so, during the preparation stage— which we call ‘goshi’—it’s largely the same process developed by Toyota Motor Corporation (TMC).

AMS: Is that part of the Toyota Production System (TPS)?

HO: It doesn’t fall under the TPS as this covers the final stages of preparation before production. Utilising ‘goshi’ we check that the equipment...or productivity is okay or not. Again, this is largely based on Toyota’s experience and is just installing the same equipment in another location. But we still worked through this, as this is the testing phase—this can take between two and three weeks.

There are other types of ‘goshi’, but this is the final stage. Another focus is on how the team member does the work so we can check for any deviation. If we produce something with deviations, they must be within tolerance. This kind of thing should be checked within the work preparation stage, which is also part of the ‘goshi’ stage.

The ‘goshi’ stage is not only about preparation and production, but it also focuses on safety for the team members 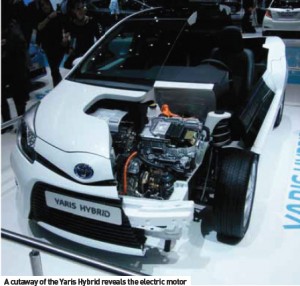 HO: On the line we don’t have a lot of high voltage areas; the parts are applied before being charged so that’s not such a worry. A primary safety issue is related to ergonomics, these things should be checked before and during the preparation stage. We simulate the conditions and then we have to confirm work conditions on the actual line.

AMS: Are there any differences between the regular and hybrid models when it comes to pressing to allow the different components to be added to the chassis?

HO: Some areas have been modified; we have to install the batteries and the inverter [and] these things are unique to the hybrid. We have modified some areas for the battery, mostly involving brackets to fix the battery pack. The motor itself is in the engine compartment, so that doesn’t need a lot of specific work. AMS: How about training for the people who are involved in building the hybrid model?

HO: Of course there was some training, but it’s not such a big difference. We have a special rework area and an area for evaluation; sometimes we have to disassemble the hybrid models. This area might be dangerous due to the high voltage, so special training is required here.

AMS: Elements of the Hybrid Synergy Drive are smaller in the Yaris than in the Auris or Prius. Does that require unique handling robots, do elements such as the grippers need to be adjusted?

The fi ve-door FT-Bh, which stands for Future Toyota – B-segment Hybrid, has been designed using the fi ve key pillars of Toyota model development: weight reduction, aerodynamics, powertrain effi ciency, thermal energy management and electricity saving. This has produced a vehicle which weighs less than a three-door Aygo without the use of any exotic materials, such as carbon fi bre, which will help reduce any production complications and related costs.

AMS: Is this development all carried out in-house?

HO: Actually that’s not all done in-house, some is outsourced and some is carried out in-house using our dedicated production engineering team.

AMS: Is the production engineering team a separate company, similar to Toyota Mii and other company suppliers?

HO: No, Toyota Mii delivers parts for production, the production engineering team is part of the staff.

AMS: In terms of the chassis for the hybrid are there any different materials used to make it lighter in order to improve efficiency, and do those need any special joining techniques?

AMS: Is there any production batching on the line? If building the hybrid takes extra steps, do you need to adjust the model build-mix in order to balance the line?

HO: We mix the hybrid versions in with the normal cars. Essentially, in terms of production time, the hybrid is similar to a model with a high specification. So a hybrid is treated as one of the options, that is how we look at it.

AMS: How many stations did you have to add to incorporate production of the Yaris Hybrid into Valenciennes?

HO: There are about 10 processes on the assembly line unique to the hybrid models.

AMS: Has TME developed any additions, changes to the TPS that have been incorporated globally?

HO: Our teams [in Europe] work closely with the production engineering teams in Japan and sometimes they have ideas which contribute to the TPS. We are trying to incorporate elements that have been engineered into production due to operating in the European Union. Then we will try to align these processes with the TPS. AMS: Can you offer a specific example? HO: We are trying to incorporate lessons learned from European production in engine, plastic mouldings and a few other areas.

AMS: And if that is found to be an improvement over the existing TPS, the process could be ported back to Japan for incorporation in the TPS?

AMS: How difficult was it to add the third shift at Valenciennes?

HO: As far as we know the Yaris will remain the only model produced at TMF. There might be other models in the series, but they would be based on the Yaris.