A focus on fibres

Lightweight, high-strength benefits are being offset by materials and process costs. James Bakewell looks at the challenges of making carbon fibre cost effective 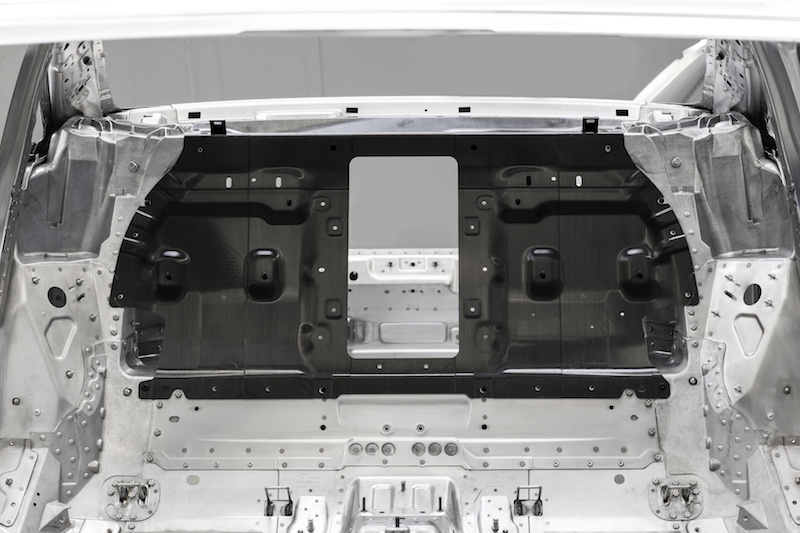 Used for the first time in earnest by Volvo, carbon fibre-reinforced plastic (CFRP) will feature in the £135,000 ($176,400) Polestar 1’s bonnet, boot lid, side panels, doors and entire roof structure. In all, this extensive array of CFRP components will make the hybrid–electric vehicle 230kg lighter than if metals were used for these parts.

In the last ten years, the likes of BMW and Audi have been driving the increased use of CFRP in premium cars – such as the former’s i models and 7-Series, and the latter’s A8 – but that has yet to filter down to truly mass-market vehicles.

“There are a lot of OEMs looking to adopt CFRP and they are carefully evaluating the business case,” says director of sales and marketing for automotive at composites producer Hexcel, Achim Fischereder. “The market is growing strongly, but not as quickly as some may have predicted after the announcement of the i series.”

There are numerous reasons for this, Fischereder continues. The supply chain for CFRP parts is not especially well integrated, meaning that material suppliers and process developers are yet to fully exploit the benefits of working in tandem. Most automotive engineers are more used to working with metals, so design and simulation tools are being developed in order to help boost their composites expertise.

But costs are probably the biggest hurdle. CFRP is more expensive that its metallic competition and many methods for forming it into parts are too slow and inefficient. Indeed, in certain processes, scrap rates – the amount of CFRP left on the floor after a part is produced – can be as high as 50%. Fischereder says such levels are untenable if CFRPs are to be employed in high-volumes. OEMs, tier suppliers and material producers are therefore working hard to develop processes and materials to rectify these issues.

Eliminating waste Automated fibre placement (AFP) methods, for instance, virtually eliminate this problem of waste. Using AFP, a robot lays down continuous CFRP tapes on a substrate to build a structure one layer (ply) at a time. This method allows for the manufacture of highly customised parts as each ply can be placed at a different angle to best carry the required loads. The use of robotics gives the operator active control over all of the critical variables, making the process highly controllable and repeatable. The resulting preforms require little to no trimming, keeping waste to a minimum.

Relatively common in the aerospace industry, AFP processes are starting to attract attention from those looking to supply the automotive industry. Indeed, BMW’s partner and carbon fibre supplier for the i models (and others), SGL, has recently opened a 500 sq.m facility dedicated to the research and development of fibre placement for the high-volume production of CFRP parts in Meitingen, Germany.

The company’s CEO, Jürgen Köhler, says: “We want components made of fibre-reinforced plastics to become a standard in every major industry. One key is [to adopt] the right production methods – with fibre placement being one of several trend-setting approaches.”

Elemental’s composites manager, Peter Kent, says it has “been able to design a bodywork component with SHAPE in carbon composite using TFP, which can act as a structural component, carrying bodywork and the rear luggage bins, and considerable aerodynamic forces.”

According to ZSK, the process is efficient – generating virtually no waste – highly automated and repeatable, and enables the production of parts that are tailored to the mechanical loads they will experience in service.

The use of thermoplastic makes the component tougher and more resistant to stone chipping than it would be if made of thermosets. It also enables the parts to be recycled simply by heating them to over 300°C to melt the matrix and extract the fibres. Recycling thermosets, on the other hand, can be a lengthy and energy-intensive process.

The TFP process begins with rovings of carbon fibre being deposited using a fixed stitching head, while an anchor material – such as a polyamide (PA) sheet, which can form part of the matrix after consolidation – is moved around beneath it on a pantograph system. Fibres can be placed and aligned as needed to better resist applied loading conditions with a minimal increase of material cost.

Although the part is still essentially two dimensional at this stage, it can be built up with successive layers of fibres to create three-dimensional surface features. The system developed by ZSK is capable of depositing up to eight layers in one process, which represents a height of 7-8mm. Multiple preforms can then be stacked on top of each other if a greater thickness is required. Once this near-net shape preform is ready, it is placed into a heated press where it is shaped into the finished geometry and consolidated.AFP methods may cut down on waste, among other benefits, but these processes may not yet be fast enough for high-volume automotive manufacture. While ZSK will not disclose how long it takes to embroider the preform for the RP1, it says it is possible lay down 1–3kg of fibre an hour using TFP, depending on the complexity of the part.

The use of carbon-fibre sheet moulding compounds (SMCs) – long, chopped fibres impregnated with thermoset resin and typically supplied in rolls – may offer a solution to the problem of producing CFRP parts in high volumes. As SMCs are highly flowable, preforms do not have to be near-net-shape in order for parts with complex geometries to be produced. This reduces waste generated by cutting.

Zoltek’s director of automotive for Europe, Tobias Potyra, says conventional glass-fibre-reinforced SMCs have been used by the automotive industry for decades to produce non-structural parts, such as body panels, quickly and cheaply using compression moulding processes. “You can use 100% of the compound; you’re not creating any scrap,” summarises. “Compression moulding is a widespread technology. It’s well-known and can be found everywhere.”

By using carbon fibres rather than glass fibres, Zoltek is targeting semi-structural and structural automotive applications. The potential of carbon fibre SMC has been demonstrated with a prototype CFRP subframe designed by Magna International and Ford. Intended for use on a C-segment vehicle – such as Ford’s US Fusion model – the subframe is 34% (or almost 10kg) lighter than a stamped steel equivalent.

The subframe comprises two moulded parts and four metallic insets – an 87% reduction in component count in comparison with the 45 metallic parts required for a standard steel subframe. These moulded parts are made from SMC, which is compounded by Magna using chopped high-filament-count (50k) carbon fibre from Zoltek.

Rather than the epoxy resin conventionally used in structural CFRP parts, the matrix used in the SMC is a vinyl ester modified in-house by Magna. The Magna team says vinyl ester adheres well with the carbon fibre and its low viscosity enables it to wet-out the reinforcement effectively – which can be challenge with 50k fibre.

The use of short-fibre-reinforced SMC enables the complex geometry of the part to be realised. However, these materials do not possess the same mechanical properties as continuously fibre-reinforced materials. In the case of the subframe, three areas of high loading in the part have to be strengthened with patches made from continuous fibre-reinforced SMC, which are co-moulded with the chopped fibre compound.

Zoltek has found that by chopping its low-cost, 50k carbon fibre into 3k tows, it can be used to produce SMCs with mechanical properties that approach those demonstrated by expensive continuous fibre-reinforced composites.

Hexcel, meanwhile, has developed a moulding compound to bridge this price/performance gap. HexMC-i 2000 employs the company’s HexPly M77 epoxy prepreg system and comprises randomly orientated rectangular prepreg chips assembled into a 2000g.m2 material. It is suitable for producing complex geometries and parts of varying thickness, and has recently been qualified for use by Audi.

This qualification was achieved through the development by Hexcel, the carmaker and composites processer Secar, of a lightweight CFRP engine bay brace for the high-performance Audi R8. This cross-shaped component braces the R8’s mid-mounted V10 engine and increases the torsional stiffness of the vehicle’s body structure. To produce the part, which is 15% lighter than the aluminium version, pullwound CFRP tubes from Secar are overmoulded with HexMC-i 2000 to form the centre node and the terminations that enable the part to be mounted to the car.

Pullwinding is a process for producing tubular structures in which spools of fibre can be laid down at any angle. It enables the production of tubes that are able to withstand stresses in more than one direction.

Working with Secar and Hexcel, Audi decided to demonstrate the feasibility of producing a composite version of an existing aluminium part that would be lighter and – owing to the more organic shapes enabled by moulding – better looking.

The partners had to ensure that the moulding compound was consolidated and that it bonded strongly with the thin-walled (<1mm) carbon tubes without crushing these pre-cured elements. The high adhesive bond strength of HexPly M77 eliminated the need for any over-compression of the tubes. The metallic inserts for mounting the cross-brace to the vehicle are all moulded directly into the part during production, with the demoulded part requiring minimal finishing before installation in the R8’s engine bay. The cross-brace also has a distinctive appearance owing to the precise chopping and random orientation of the prepreg chips in HexMC-i.

Audi has subjected the part to a rigorous programme of static and dynamic load testing at room temperature and in hot, wet conditions. It is interesting to note that R8 serves as something of a testbed for new technologies for the carmaker – the CFRP rear wall now found in the A8 debuted on the sportscar.

So, it seems that CFRPs place in the construction of high-end and premium vehicles is assured, but there must be a compelling business case for it to be employed in high volumes. GM’s use of the material to manufacture an optional truck bed for its 2019 GMC Sierra is a case in point. Not only is this part significantly lighter than metal alternatives, it is also highly resistant to dents and corrosion – a real boon when employed in a workhorse such as a pickup. Summing up, Hexcel’s Achim Fischereder says producers of CFRP “must show that we can do things with composites that cannot be done with metals. We must differentiate.”