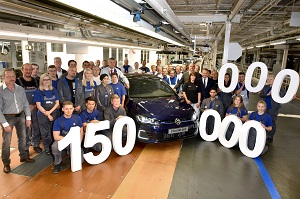 Germany – The vehicle marking this achievement was a Golf GTE, which rolled off the assembly line at Wolfsburg on August 25, more than 80 years after the company was founded. Volkswagen described the plug-in hybrid as “a symbol of the future of mobility”.

VW’s 150m vehicles have been produced at over 50 locations in 14 countries, including more than 34m Golfs and 21.5m Beetles, before manufacture of the latter ended in Mexico in 2003. The company has also made over 20m Passats, 19.5m Jettas and 17m Polos. Series production for the Volkswagen brand began in December 1945 with the Type I Käfer. The main plant at Wolfsburg has played a key role in reaching the 150m-unit milestone, having made 44m vehicles since the start of operations 72 years ago.

Herbert Diess, CEO of VW, said that “it is vital that Volkswagen continues to develop successfully” and that the OEM has “a good plan for the future”. He added: “We must consistently work on our performance in order to remain successful. Past success is no guarantee for the future.”

VW’s current line-up encompasses 60 models worldwide; launches this year stand at ten, while 19 SUVs will be introduced by 2020. From that year, VW will push its I.D. family of vehicles based on the new electric architecture (MEB), in the hope of putting 1m electric cars on the road by 2025.