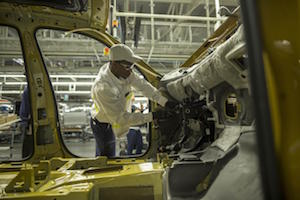 US - The German manufacturer has revealed plans to build a new variant of the Atlas SUV at its Chattanooga factory in Tennessee. Designed for five passengers instead of seven, the variant will also be based on the MQB platform, and will be designed and engineered specifically for the US market.

"The Atlas has built strong momentum for Volkswagen in the SUV segment, and we are excited to grow our SUV portfolio with this new, Chattanooga-assembled five-passenger SUV," noted Hinrich Woebcken, president and CEO, Volkswagen Group of America. "We are not only committed to this market, we are committed to our US manufacturing home in Chattanooga, Tennessee."

The new five passenger Atlas will be the third model produced at the plant, alongside the Passat and the larger variant. As all three models are based on the MQB platform, they share the same front axle, which is supplied by thyssenkrupp. They also share the same pedal box and engine positioning, but have different wheelbase, track and external dimensions.

VW has said it will spend around US$340m to bring the smaller Atlas to market, and plans to invest an additional US$900m to expand the Chattanooga factory for increased SUV production. According to statistics from GoodCarBadCar - a website that tracks sales data in the US - demand for midsize SUVs is currently soaring. The segment saw a 9.8% increase in sales during January 2018 when compared to the same month in 2017.