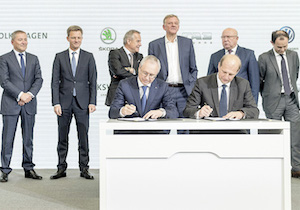 Russia – The manufacturing agreement to produce Volkswagen and Skoda cars at Gorky Automobile Plant, originally signed in 2011, will now run to 2025. Moreover, the two companies defined the model versions to be produced, set out plans to adapt GAZ’s production capacities for the launch of new models for Volkswagen Group Rus and agreed that VW will supply 2.0 TDI engines to GAZ in future.

“We are extending our successful partnership with GAZ Group for contract manufacturing because local production has always been a key element of the Volkswagen Group’s long-term development strategy in Russia,” commented Marcus Osegowitsch, general director of Volkswagen Group Rus. “Even during [the] last three crisis years we continued to develop our business in Russia, investing an additional €500m [$556.2m] in production and facilities.”

Vadim Sorokin, president of GAZ Group, commented: “The agreements signed today prove the success of our five-year collaboration with Volkswagen Group Rus, which already spans more than five years, and open up a new level of our cooperation. We are thus starting the second lifecycle of our industrial cooperation.”

The 2011 deal led to the modernisation of Gorky, including the construction of new assembly and body facilities plus the upgrade of paint, logistics and quality control systems. Personnel were trained at VW and Skoda plants in Germany and the Czech Republic, and a new training centre was established at GAZ. Under the agreement, 200,000 vehicles have been produced by around 3,000 employees, including the VW Jetta and the Skoda Yeti and Octavia.

The 2.0 TDI engines to be supplied by VW will come from the Salzgitter plant in Germany. These will be fitted to the new GAZelle NEXT family, including drop-side trucks, full-metal vans and minibuses, therefore opening up new business opportunities in international markets. VW will provide technical support for the integration of the engines into GAZ’s model range.

The modernisation of Gorky, which currently has a capacity of 132,000 vehicles per year, is set to continue with the extension of the manufacturing deal.