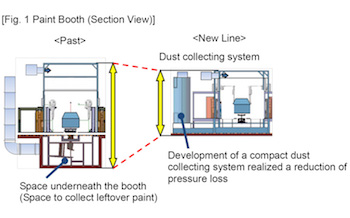 Japan – The vehicle-maker says it has reduced the size of the equipment by 40% and the CO2 emissions by 32%, “while maintaining high quality levels” for Prius production. The achievement was recognised in March, when Toyota won the Okochi Memorial Prize for the first time in 16 years.

The paintshop development came as part of the OEM’s ‘Plant Zero CO2 Emissions Challenge’, one of six targets in its ‘Environment Challenge 2050’ which was unveiled in 2015. Toyota was able to decrease the paint process length, plus the height and overall size of the equipment.

The improvements include: reduced space for excess material under the paint booth; a narrower air supply room; jidoka (‘automation with a human touch’) of cleaning and interior painting; enhanced robot processing capabilities; an optimised transfer pitch; a decreased cross-section of the drying oven; and compact deodorisation equipment.

Toyota says that reducing the space under the paint booth made the greatest contribution to the drop in line size. The smaller equipment, decreased pressure loss and a new method of using centrifugal force to collect surplus paint also contributed to the reduction in CO2 emissions.

The OEM has plans to roll out its revamped paint line to its other plants in Japan, and overseas facilities.