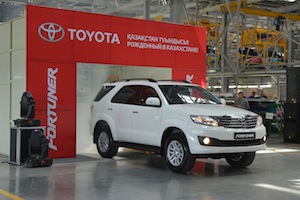 Kazakhstan – The OEM has commenced complete knockdown (CKD) activities for the body-on-frame SUV at Saryarka AvtoProm (SAP) in Kostanay, the first production site for Toyota vehicles in the region.

“We have chosen to build this model locally as we are confident it meets the requirements of local customers in the best way,” commented Didier Leroy, senior managing officer, Toyota.

The start of production in Kazakhstan forms part of Toyota’s plans to strengthen its business in emerging markets, as set out in the 2011 Toyota Global Vision. Over the past few years, the vehicle-maker has initiated localised production, focusing on CKD/SKD, in a number of regions. Fortuner manufacture began in Egypt in 2012, while Land Cruiser SUV assembly started in the Russian Far East in 2013.