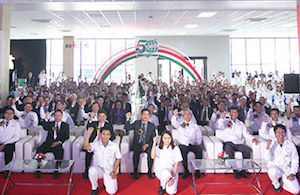 Thailand – The company this month held a special event at Ladkrabang plant to acknowledge the milestone. Thai Honda Manufacturing was actually established in 1965 and began motorcycle production in 1967. Thai Honda now employs 8,200 workers in total and has the capacity to make 1.7m motorcycles per year.

Thai Honda added power products to its portfolio in 1987, then mid-sized motorbikes with 250cc engines in 2010. The following year, the company installed a new production line specialising in mid-to-large-sized motorcycles for global markets. In 2014, large-sized motorcycles such as the CBR650 Series were added to the line-up. The portfolio now includes the PCX, CBR250, CBR300, CBR500, CBR650, MSX, Wave (110,125), Scoopy i, Click 125 and other models.