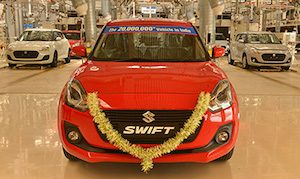 India - The OEM has now made over 20m vehicles in India since it started operating in the country back in December 1983, with over 1.78m built in 2017 alone. The Alto is its most produced model, with approximately 3.17m units made to date.

Production of 16 Suzuki models is currently carried out at three plants across India. It's Gujarat plant is located two hours north west of Ahmedabad, and is 100% owned by Suzuki. The Gurgaon and Manesar plants are operated by Maruti Suzuki - a company that is mainly owned by Suzuki, but with smaller shares held by various Indian public and financial services.

News of the milestone comes shortly after Maruti Suzuki revealed its sales figures for the first quarter of 2018. Total domestic sales were up by 19.3% compared to the same period in 2017, while exports rose by 33.1%.