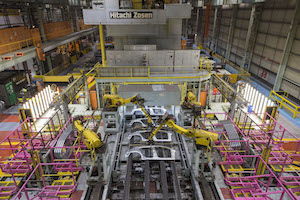 Are we entering a new era of robotics and automation in vehicle manufacturing? This was the central topic at a recent conference held by the Automatica show organisers, and it generated some interesting ideas. We are all aware that the increasing level of automation makes some people feel uneasy because they see the introduction of more robots as an obvious threat to jobs. But far from a gloomy dystopian future, it was suggested by Patrick Schwarzkopf, MD at VDMA, Robotics & Automation, that the rise of robots will actually benefit the wider human workforce, by helping to deliver improved productivity, wages and working conditions.

There are a number of factors which come into play. In markets and regions where robot density (number per 10,000 employees) is already at a high level, further automation programmes will aim to enhance the work of humans rather than replace them. The Industry 4.0 movement is seeing faster development of software control for robots and their integration into more operations, leading to increasingly flexible automation systems.

A big driver for this is the growing demand for the customisation of vehicles. Automated systems need to be more adaptable to short-run operations and the challenge of switching tasks in response to changing demand. We are already seeing serious development of human-robot collaboration, and Schwarzkopf speculated that in the future all of these developments might see a shift away from linear production lines to a modular structure. He also noted that over the period 2010 to 2014, the German automotive industry saw an increase in the robot population of 15%, but instead of a decline in personnel there was in fact an increase of 10%.

In this case at least, the figures suggest that increasing automation doesn’t necessarily result in a reduced human workforce. Schwarzkopf pointed to work by David Autor, professor of Economics at MIT, who has suggested that, rather than diminishing the employee’s position, “automation increases the value of human inputs”.

To help explain this, he offered up Polanyi’s paradox: “We know more than we can tell”. This encapsulates the number and variety of inputs needed to create a work process and highlights the fact that some of these inputs are uniquely human, such as long-developed skills and experience. The presentation suggested that it will be tasks which are automated, not professions.

Schwarzkofp’s presentation ended with a look at the direction that automation might take in the future. Will Artificial Intelligence prevail, reducing the need for human input, or rather will the shift be towards Intelligence Augmentation, enhancing human capabilities through closer collaboration between workers and robots?