Renault to spend €162m at Curitiba 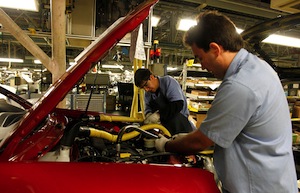 Brazil – The new investment cycle, worth 500m reais or US$224m, will run between 2014 and 2019 and will centre on the development of two new vehicles at the plant in the state of Paraná.

Describing Brazil as a “priority” in the Group’s global growth strategy, as its second largest market after France, chairman and CEO Carlos Ghosn commented: “Renault Brazil successfully completed its previous investment plan and is now pursuing the ambition of expanding its domestic market share.”

The vehicle-maker has been manufacturing in Brazil for 15 years and had a market share of 6.7% at the end of March; its target is 8% by 2016.

Renault’s previous investment of 1.5 billion reais was used to increase the annual capacity at Curitiba from 280,000 to 380,000 units, to update the product range with two new models (the Master and New Logan) and to boost the dealership network by 100 to a total of 275.