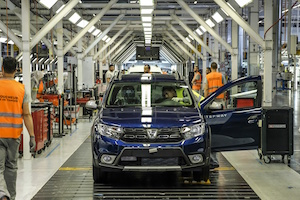 Morocco – The milestone unit, a diesel-powered Dacia Lodgy destined for Turkey, rolled off the production line five years after the start of operations. The plant has now made 193,191 Lodgys, plus 474,840 Sanderos and 320,078 Dokkers.

The first line at Renault-Nissan’s Tangier factory was inaugurated in February 2012 and a second was unveiled the following year. According to the OEM, the additional line made it “the biggest car manufacturing plant south of the Mediterranean”. The factory now has an annual capacity of 340,000 vehicles and operates three shifts, six days a week.

Tangier was Renault Group’s first plant designed to generate “zero” C02 emissions and industrial effluent. Renewable energy, notably biomass, fills 90% of power requirements, saving 100,000 tonnes of C02 per year, while energy use in production is minimised, including a 45% saving in the paintshop compared with the Group average. The consumption of industrial water has been cut by 70% against conventional requirements, while a closed-loop treatment plant recycles 100% and saves around 900 c.um of water per day.

Renault Group arrived in Morocco in 1928 and, besides Tangier, it has a manufacturing facility at Casablanca (SOMACA), which has produced Renault models since 1966 and Dacias since 2005. The two factories make over half of all Dacias.