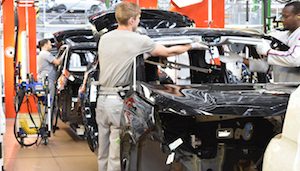 France - Growing demand for the Peugeot 5008, as well as strong sales for SUVs in general, has warranted the creation of a fourth shift at the facility. 350 people will be hired as a result, and will begin working at the plant on Fridays, Saturdays and Sundays in December 2018.

"This fourth team confirms the momentum that has been building since the Contract for the Future of Rennes took effect in 2016," recalled Thérèse Joder, Rennes plant manager. "Signed by four out of five French trade unions and supported by the Greater Rennes area and the region of Brittany, this agreement has enabled the plant to be upgraded and the Citroën C5 Aircross to be produced in Rennes. This is great news for the Rennes plant and a real source of pride for everyone who works here."

PSA has revealed that the Rennes plant is also being prepared to ramp up production of the Citroen C5 Aircross, which will hit the market at the end of the year. The model has been on sale in China since September 2017, where it is built at the Dongfeng PSA plant in Chengdu.

The French carmaker has high hopes for sales in Europe. It recently announced plans to start making the 5008 at its Sochaux plant if Rennes hits maximum capacity.