In the past 10 years, laser welding has moved from an exotic joining solution to a mainstream tool used in most body-in-white facilities.

Here, it is now used in place of many conventional processes, such as resistance (spot or seam), submerged arc, RF induction, high-frequency resistance, ultrasonic and electron-beam welding.

Laser welding beams can be guided to the processing location in a network-like manner using flexible fibre optic laser cable, and then applied by robots fitted with different optics. However, there are a number of material considerations for laser welding applications and one of these is thermal diffusivity, or the ability of the material to conduct heat. The lower the diffusivity, the more the heat stays in the region of the laser beam spot.

Metals with low boiling points generate high quantities of metal vapour and this can lead to gas breakdown and plasma generation in the area of high beam intensity (fractionally above the metal surface). Plasma hungrily absorbs laser energy, blocking the beam. As a result, bubbles can form at the weld root and if viscosity is high, these bubbles cannot escape before solidification takes place.

While a material’s melting point does not have a major effect on weldability, it must be reached during the initial absorption of energy. Hence, low melting point materials are easier to weld with a laser than those with a high melting point.

The effect of welding on various materials also depends upon many of their metallurgical properties. For example, after the applied energy is removed, the melt pool solidifies and cools slowly to the same temperature as the surrounding material. During this timeframe the metal contracts, generating tensile stresses in the fusion zone. Materials that exhibit a low tensile strength at temperatures near their melting point have a tendency to generate cracks in the weld.

For butt and seam welds, laser energy is applied at the junction of the materials, minimising heat input and distortion, while also permitting high processing speeds.

However, these butt joints must fit accurately. Because bodyin- white mainly deploys lap joints, the tolerances for seam alignment are less stringent. Here, the width of the weld is the major consideration. Another advantage is that the upper material forms most of the fusion zone, so a highly-weldable material can be welded to less suitable material by placing the former material on top. 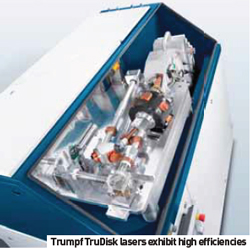 There is much discussion as to whether manufacturers should continue using lamp-pumped solid state lasers or move to diode-pumped disk lasers and diode lasers. According to Trumpf, its TruDisk lasers demonstrate around 25% efficiency, compared to that of lamp-pumped solid state lasers, which typically exhibit about 3% efficiency. The disk laser is also a more flexible tool because it can be used not only for welding and soldering, but also for remote welding and cutting.

A flourishing use for disk lasers in the auto industry is remote laser welding. Essentially, this is an approach that has a stand-off distance from 500 to 1,000mm between the workpiece and the programmable focusing optics (PFO) package, which may be on the end of a robot arm. The PFO contains scanning optics for the X and Y axes.

Through the use of mirrors, the beam is quickly located on to the workpiece surface as required: consider that if the focal distance is 1,000mm and the requirement calls for spots to be separated by 25.4mm, it doesn’t take much in the way of adjustment to get there. One immediate consequence is that there is maximum beam-on time, which helps justify the cost of the equipment.

This programmability means the shape of the weld can be precisely controlled. That is, if a sinusoidal or a ‘C’ shape is required, then the PFO facilitates generating that shape, especially as compared with a set-up wherein a robot manipulates a conventional laser welding head. In practice what this means, for example, is not only can the weld shape be tailored to suit the end-product strength requirements, but also the weld length. In the case of a door opening, it is possible to have stitch welds every 50mm around the door frame, yet switch to a continuous weld at the pillars where additional strength is needed.

Rofin is another supplier with a keen interest in this technology area. The company’s new Scanner Welding System (SWS), which made an appearance at the Laser World of Photonics 2011 exhibition in Munich this year, is a fast beam deflection system used for robotically-guided, multi-spot welding, and has been specifically developed for connection to the Rofin fibre laser series.

The fibre laser is integrated into fully-automated welding systems in combination with a three-axis scanner and Rofin’s RobotSyncUnit. By coupling all axes of the scanner with those of the robot, which is used as a guiding machine, the system commands a total of nine selectable axes to provide a complete solution for welding 3D components.

Regardless of whether the focus is spot, circular, wave or stitching seams, the seam geometry is freely programmable and can therefore be adjusted to strength and component requirements, says Rofin. Through very fast repositioning to the next weld location and minimised non-productive time, high process utilisation can be realised. The real time processing of the geometric data through the control, as well as via the rotating mirrors in the scanner head, enables extremely fast laser beam repositioning of <10ms within the working field. Robot movements and speeds are optimised via offline programming, while functions also calculate the path errors of the robot so that repeat accuracies in the range of <0.1mm are possible.

Only 20 years ago laser welding was in its infancy and used primarily for exotic applications. Today, laser welding is a full-fledged part of the automotive industry, and nowhere is its use growing more rapidly than in BIW production.