The end result of a long, multi-branched production process is a vehicle of the highest quality built to exact customer specifications. Along the way, vehicle data, including specification information, is normally carried on RFID (Radio Frequency Identification) tags, which generally include contactless readable and writable data storage units mounted to the transport skids. These enable a clear identification of the respective vehicle body at important points of the process, determining the right course and manufacturing steps needed to complete the vehicle as required.

Product identification and tracking by means of RFID has been used for many years at the Volkswagen plant in Hanover, Germany. In addition to producing the T5 range of vans, the plant also produces bodies for production of the four-door Porsche Panamera, with the bodies mixed in with the vans as both models enter the paint process. This ensures optimal capacity utilization of the three top-coat lines, which handle conventional as well as five-layer metallic paint application in a ‘5a process’, using water-based product.

To avoid frequent colour changes, the made-to-order Panamera bodies are sorted and stored for optimized batch painting. Once the vans and cars are painted, the vans travel on for final assembly at the same location, while the Panameras are arranged in a ‘string of pearls’ and then shipped by rail just-in-sequence to the Porsche plant in Leipzig, Germany.

System change: Back to the future 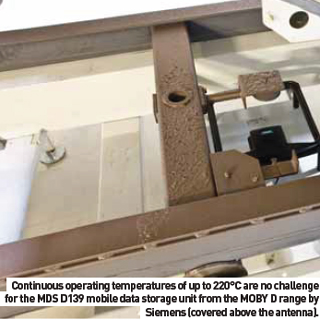 With the decision made to replace the vehicle identification technology already in place, planners at VW needed to initiate a system change in advance to seamlessly migrate the RFID technology. In addition to its core usage, the new system should also simplify training and plant maintenance, while also addressing the ongoing need to future-proof the setup. For example, the need for a consistent standard was paramount, as was the requirement to guarantee spare part availability; parts must be made available for up to a decade in the future.

Making the situation even more difficult was that in the final configuration stage, the vehicle bodies – and thus the skids including the RFID tags – would have to go through the paint lines and the subsequent drying process, where temperatures could reach up to 100°C. “Only a very few data storage systems can withstand that over extended periods of time,” states Meik-Axel Gensler, from the management for computer systems in the vehicle construction technical department at VW. “In addition, we were looking to make this as simple as possible, reliable, and at the same time a cost-optimized solution.” Over an extensive testing period, many of the criteria were ultimately met by the MOBY D RFID system, developed by Siemens, which offers a new strategy and topology for data handling and data storage in the paintshop.

Instead of storing all vehicle body or production data on hard media and reading them at the individual stations, the new system allows only VW to read the unique ID tag assigned by the equipment manufacturer. Linked to this ID tag is a vehicle master data record containing all the necessary attributes, such as body number, contour, superstructure and colour. Operating material head controllers (BMS-Ks) coordinate the automation systems of a given section (including pre-treatment, underbody coating, seam sealing, etc.), using predominantly PLCs for the materials handling. These are connected to a material flow system (MFS), which in turn is subordinate to the plant-wide vehicle information system (FIS) monitoring vehicle flow across the entire Hanover plant. BMS-K, MFS and FIS are executed redundantly – so that the data remains consistent even if a subsystem should fail.

Failsafe performance was also one of the deciding criterion in selecting the RFID system for the paint shop environment, which is why the MDS D139 mobile data storage unit from Siemens’ MOBY D system was chosen.

Designed for continuous use at temperatures up to 220°C, the IP68/IPx9K protection-rated MDS D139 is virtually indestructible. In the case of mechanical damage to an RFID tag – extremely unlikely under normal operating conditions – a new data medium is simply installed and the new ID tag linked to the corresponding data record via a mobile read/ write device using the barcode carried along in parallel.

Another advantage of the MOBY D system is the maximum read/write distance of up to 600mm between the mobile data storage unit and the antenna. This offers more freedom in the mounting of the antennas, or greater tolerances in the fabrication of the materials handling and processing/machining equipment, which of course can also serve to reduce related costs.

Moving to an integrated PROFINET communication

After completing the changeover in the underbody coating section of the paintshop, more than 135 SLG D11S read/ write devices were installed in the distributed control boxes. The corresponding ANT D5 RFID antennas, with IP65 protection rating, were installed on the conveyor lines using their direct mounting technology. The communication between MOBY D readers and the local SIMATIC controllers occurs via PROFINET. The vehicle master data records are transmitted by the readers to the BMS-K using the standardized file transfer protocol (FTP). The integrated PROFINET architecture also simplifies the diagnosis and maintenance of installations spread over several buildings and floors. Using the system, malfunctions can be precisely localized from a central location, helping to reduce downtime. 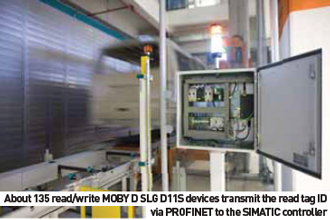 After the positive experience with the MOBY D RFID system, Volkswagen gradually equipping all other sections of the paintshop with the same hardware. During the transition period, operations were still run double-tracked, which allowed for a co-ordinated migration that took place in co-operation with production personnel. When transitioning from the body construction area to the interim storage space in the control building, the Panamera bodies are switched to other transport systems.

Associated with this is a handing over/assumption of vehicle data to/from another identification system. The areas upstream of the paintshop have far fewer requirements with regard to temperature resistance, however manufacturing steps have to be initiated and in part also visualized by means of the vehicle data.

Unlike the previous solution, the passive operating system manages without a battery in the data storage units, which in addition to cutting hardware costs, also helps to reduce anticipated maintenance work, one of the key criteria used when determining which application should be used across construction of the Panamera bodies.

The RF380R read/write devices – mounted under a glass sheet for additional protection – are connected directly to the SIMATIC area controllers via PROFINET. The credit card-sized RF360T data storage units offer a virtually unlimited number of read/write operations. All the master data required for body construction is stored in this way, meaning that the required work can be automatically performed or workers can carry out instructions delivered by the local HMI device.

“We chose the RF300 system and had a function block written for it, so that now and in the future we are can ensure a uniform, standardized connection to the controllers, regardless of who is entrusted with the implementation,” says Andreas Freise, Computer Systems Technical Department Advisor.

The RF300 RFID system is now the first choice when shipping Panamera bodies, with the issue being to generate an optimized ‘string of pearls’ from the control building for final assembly at the Porsche Leipzig plant – so that the bodies arrive by rail just-in-sequence. To save transport space, two painted bodies are transferred on a double transport-rack, with individual vehicle data written to one RFID tag.

To date, the modernized or newly-implemented RFID applications in place at the Volkswagen Hanover plant have been running without malfunction. Combining favourable acquisition and operating costs, the system now guarantees smooth operation across daily production of over 800 T5 vans and up to 160 Porsche Panameras.