Fasteners, adhesives, brazing, spot welding, arc welding: lots of choice for body-in-white engineers, but which solutions are winning out?

Selecting the optimum joining method for body-in-white manufacturing is a delicate task. Considering that, in principle, a car body engineer has only three parameters to combine for the best solution – geometric shape, material and joining method – it’s vital to make the right choice.

Conventional welding techniques such as resistance spot welding and arc welding continue to be a mainstay at modern body shops, but this doesn’t mean that the method of applying these technologies hasn’t moved on. By way of example, automation specialist ABB recently announced it had helped Mazda’s new factory in China achieve flexible production and improve productivity by 15%.

The new body-in-white welding line at the Changan Ford Mazda Automobile Company’s (CFMA) latest plant in Chongqing is manufacturing the next-generation Ford Focus, but it will also be producing other Ford passenger cars in the future. The line uses ABB’s FlexLean technology, with the company’s patented FlexTrack and FlexLifter as a flexible conveying system. This solution supports the production of different car models on the same line, which in turn is the driving force behind the already-mentioned 15% increase in productivity.

Welding lines traditionally use conveying systems operating at a fixed position and speed of motion. However, ABB’s FlexTrack can be programmed to control the position, speed and acceleration of the track motion. The car body pick-up and drop-off position at each station can be programmed much like a robot to enable the transfer of different car models. Basically, add a new program and a new model can be introduced to the line. According to ABB, this flexibility reduces the required capital investment of a new line, while also saving floor space.

The programmable nature of FlexTrack and FlexLifter allows the production planner to schedule the manufacture of the different car models in random order. As a consequence, CFMA can adjust the production volume of each model according to market demand. 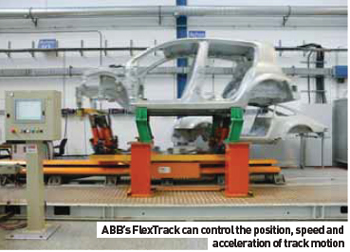 Automation is also pivotal to the welding lines at Kuka Systems’ manufacturing operation in Toledo, Ohio, which recently celebrated the production of its 500,000th Jeep Wrangler car body as the plant transitioned to manufacturing 2011-model year vehicles.

The Kuka Toledo Production Operations (KTPO) is one of four plants comprising the Toledo Supplier Park, the only venture of its type in North America. KTPO builds the body-in-white, while Magna Steyr operates the paintshop and Mobis North America, a division of Hyundai-Mobis, assembles the chassis. Chrysler is responsible for final assembly.

The Toledo line is equipped with 245 robots and is staffed by 240 employees working two shifts per day. According to Kuka, KTPO’s first-time capability rate – the percentage of Wrangler bodies passing initial inspection and going to the paintshop without secondary inspection or reprocessing work – is industry-leading. 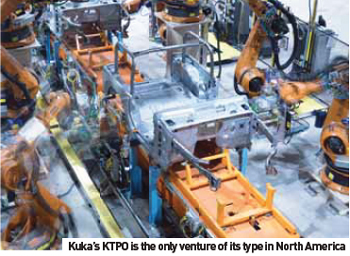 So do material trends have an influence on BIW technology?

It’s well documented that replacing steel with aluminium can reduce car body mass by up to 40%, but the switch is not without its problems in terms of joining. Although resistance spot welding is capable of making lap joints in aluminium sheets, the process requires three times as much electrical power than it does for steel. This increase in power leads to shorter electrode lifespans, with proportionally higher energy costs.

But now there’s a different method – friction spot joining – which is performed by applying a rotating cylindrical tool to the parent sheets under pressure. At the tip of the tool is a threaded projection called the pin. The configuration and dimensions of the tool, especially the pin, vary depending on the material, the thickness of the sheets, and the strength requirements of the joint, or so says Kawasaki Robotics which pioneered the process in Japan with Mazda.

The process has four steps. First, the rotating tool is positioned perpendicular to the work surface - depending on the application, the tool may rotate as fast as 4,500rpm. Next, the tool is pushed against the surface of the top sheet.

Again, depending on the application, the axial load applied to the sheets can range from 1.4 to 5.9kN. Friction from the spinning tool heats and softens the materials but does not melt them. In less than one second, the pin enters the softened metal and after the pin has plunged completely into the workpiece (the pin does not fully penetrate the bottom sheet) the tool continues to spin and apply pressure to the joint for a predetermined length of time. During this stage, the materials around the pin are stirred together, and the lapped plates are metallurgically unified in the surrounding area. At this point the tool is extracted from the sheets and the joint is complete. The entire process takes approximately two seconds.

The key parameters of the process are rotational speed, axial force, and the duration of the force. Depending on the application, assemblers can expect a joining tool to last for hundreds of thousands of joints, and Mazda claims it can get more than one million joints from a single tool. Here, friction spot joining has been used on sheets ranging from 0.94 to 3mm thick.

At Jaguar, which has been progressive in its adoption of aluminium, structural adhesives and self-piercing rivets are preferred. The company says this is largely because coldjoining technologies are better from an environmental point of view than traditional, fusion-joining technologies.

According to Jaguar, MIG and laser welding are quite energy-intensive, while also requiring cooling water and air extraction. A rivet gun uses a tenth of the electricity needed by a spot-weld gun, so as well as getting a lower carbon footprint for the car by reducing weight, Jaguar can also reduce the factory’s carbon footprint.

Like welds, fasteners can be automatically applied. According to fastener manufacturer Profil, there are different configurations of robot for body-in-white applications. Firstly there is a stationary C-frame press whereby the robot directs the sheet metal component to the punching operation. One or more C-frame presses can be deployed, for instance, if the arrangement of joining elements is not axis-parallel. Here, many elements can be introduced in a single stroke.

The alternative is to use a robot carrying the processing tool, guiding it to the punching operation of the sheet metal part. C-tongs (tools) on the robot arm fasten the insertion station into the cell, so that the robot arm moves freely in the space and is not joined with the delivery device. The necessary magazine size on the C-tongs depends on the elements required for a working cycle.

According to Henrob, the company’s MagFeed technology completely eliminates the well-documented problems of feeding loose rivets to robot mounted riveting tools. The difficulty of dressing conventional blow feed tubes connecting the bulk fastener supply to the riveting tool on a robot arm is designed out, thereby removing the single most unreliable feature in a single stroke. It also allows the robot far greater freedom to articulate, while improving cycle time over conventional blow feed technology.

Roger Doo, the company’s Engineering Director, says: “By making use of the dead time during component transfer between cells or stations on a typical automotive line, we rapidly load the desired quantity of rivets to the magazine allowing the robotic riveting tool to maintain continuous, uninterrupted production. Very positive feedback from product trials has lead us to develop several tool configurations, including a variant supplying two different rivet types to the same riveting tool. These variants offer particular solutions for rationalisation of the process resulting in reductions of the overall tool count. This benefit, combined with the secondary reduction effect on related facilities, such as quantity of robots and floor space, can result in substantial savings in investment.”