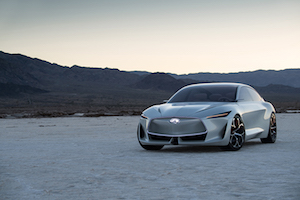 China - The company has said that it will build five new models in China during the next five years, starting with the QX50. This will soon be followed by electrified models, the first of which is likely to be based on the Q Inspiration concept.

"Over the next five years Infiniti is planning to localise five new vehicles in China, tripling our sales here in our fastest growth market, globally," commented Roland Krueger, Infiniti's chairman and global president. "As part of our roadmap to electrify our portfolio, we anticipate that by 2025, more than 50% of new Infiniti vehicles sold globally and in China will be electrified. Together with our partner Dongfeng, Infiniti is pursuing localisation in China for China, expanding our network footprint and introducing new technologies, such as our world's first production variable compression engine (VC-Turbo), and vehicle electrification, such as e-POWER."

The QX50 SUV comes with the VC-Turbo engine as well as a host of advanced driver assistance systems (ADAS), such as advanced intelligent cruise control and distance control assist. It is set to be unveiled at the 2018 Beijing International Motor Show, and will be made at the Dongfeng Nissan plant in Dalian, southern Liaoning.

In January 2018, Infiniti announced that it would "go all electric from 2021". This means that it all of its powertrains used in new models launched after 2021 will incorporate some level of electrification.