In the line of fire: which automated machining is best?

For years transfer machining lines dominated production halls at automotive plants around the world. Then came the backlash as plants sought greater flexibility, even higher productivity, and improved reliability – downtime at one station can bring the whole line to a halt. But transfer lines have evolved to overcome the overriding preconception that they are simply rows of inflexible machining stations that cannot accommodate product mix changes, according to Italian transfer line specialist, Giuliani (part of Bucci Industries).

In the past, transfer machines were mechanical and difficult to reconfigure for different jobs. Manufacturers lost money when jobs dedicated to transfer machines had to be abandoned prematurely, and a preference for standard machines such as machining centres was the result. However, a modern transfer machine is likely to be a flexible CNC machine tool itself – a machine for which the only step required for changing the job might be replacing the workholding.

The Proflex machine, recently introduced by Giuliani, comprises five workstations arranged around a vertical trunnion. One station has opposing spindles for turning, while the next four stations offer multiple spindles for machining centre operations such as milling and drilling. The part receives some portion of its machining at each of the stations so that five parts are in work simultaneously and anywhere up to 32 spindles might be addressing different stages of the same part number at any given time.

The work can be loaded in ways similar to a lathe or machining centre. For instance, a bar feed could load stock up to 36mm diameter, or a robot could load castings, forgings or blanks as large as 125mm. Bucci USA Sales Director David Rosbottom says the machine has already been used to make small automotive parts such as valves.

A typical job involves batches of at least 200,000 or annual quantities in the order of two million parts.

Transfer lines are not small investments, and with so many installed at automotive plants around the world, numerous OEMs have looked for ways to improve their efficiency. A recent case in point can be seen at Ford’s engine plant in Dagenham, UK. Practical know-how from the Dagenham manufacturing team, together with detailed computer analysis from Dr. Tom Weber, who works with the Association of Manufacturing Technologies, have transformed the efficiency of the plant’s cylinder head machining line – one of the biggest machining facilities and the longest CNC line in Ford of Europe.

Using cutting-edge digital technology, Dr. Weber studied Ford’s manufacturing processes over an 18-month period to find areas where efficiency could be improved. According to Ford, the outcome of the study has meant that Ford’s cylinder head machining line is now running up to 25% faster, with fewer stoppages and with optimum levels of quality.

“Ford is at the forefront of automotive CNC machining, and has taken significant steps to advance this technology.

The lessons we have learnt here can be rolled out to current and future CNC facilities in Asia Pacific, Romania and Cologne,” says Dagenham Machining Production Manager, Dave Black.

The modular machining line at Dagenham comprises machines manufactured by Germany’s Cross Hüller, part of the MAG Powertrain group. According to MAG, modular transfer line units can take many forms – single axis, crossslide, or rotating axis units. As line extensions, the company can also offer triple-axis units with moving speeds up to 40m/min; these are used with a motor spindle or a six-spindle revolver head.

One recent development is the introduction of MAG’s Specht 500/630 horizontal machining centre, which has been designed to suit application requirements ranging from oneoff work in job shops to agile machining lines. The Specht builds on five basic configurations with more than 100 options to form machining solutions that can be customised and upgraded. Stand-alone machines are equipped for self-contained chip and coolant management, while cellbased machines use individual pump back units for central coolant systems. Cell-ready versions are available with numerous pre-engineered part-handling systems, including pedestal robots, overhead gantries and robots, floor-level track-mounted robots, and the Cincron fixture storage and delivery system. 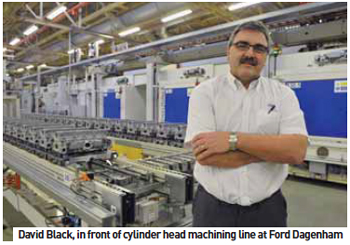 Modularity is clearly vital, but another automotive machine tool specialist Heller, based in Germany, has a different spin on things. The company claims that by using its MLS ModuleLineSystem, automotive manufacturing solutions that combine a high degree of flexibility with optimised piece part cost can now be implemented.

It is certainly clear that auto plants must have a production system which provides a minimum time-to-market, while allowing frequent changes in production volume, component design, process sequences and part flow without incurring a piece part cost penalty.

While many have turned to individual machining centres, Heller says these alone are not the answer. The MLS is a networked and integrated system composed of flexible machines linked together in an almost-infinitely variable pattern to give versatility in production, even allowing the production facility to be built while the engine design is still fluid. Each machine forms one independent, but integrated module, linked by an automated parts and tool handling system and a single integrated system controller that matches the capability of each machine with the process.

Using adaptable machining modules, components are conveyed from station to station by centrally automated traction-less carriages. Components can skip stations as the machining sequence dictates. A component buffer is integrated into the MLS and intelligent component logistics ensure that each machine gets the next component while machining the current one. 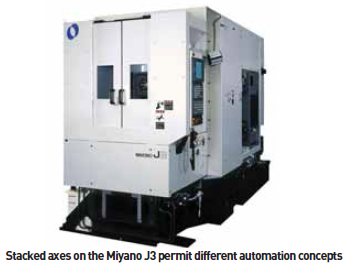 Makino of Japan is another manufacturer with its own spin on machine design for flexible transfer lines. The company’s J3 for example, which is primarily intended for the machining of mass-produced aluminium automotive parts, can be integrated into different automation concepts due to its ‘stacked axes’ design, insulating all linear movement from the worktable/fixture.

Fixtures are of course a fundamental part of successful automated machining, and with the automotive sector well on the road to recovery, many in the machined parts supply chain are looking closely at this technology area.

According to US workholding expert, Kurt Manufacturing, a Tier One auto supplier has recently placed a $250,000 order for custom fixtures designed to facilitate automation.

The initial order called for 10 custom workholding fixtures to be integrated with robot arms into an existing automated transfer line. The line’s eight horizontal machining centres are used for machining of automotive bearing housings that consist of two cast iron pieces that must be connected with a flatness tolerance of 0.015mm across the mated surface.

Each robot arm serves two machines, and each machine has two associated fixtures. At each station, the HMC machines workpieces in one fixture while a robot arm unloads finished parts from the second before reloading it with a raw casting.

Automating the line has enabled the company to increase production from 1,800 assemblies per day to approximately 4,500 in one eight-hour shift. Key to the success of this project are custom features incorporated into the Kurt fixtures. For example, each includes a pass-through ‘window’ that allows cutting tools to access all sides of the part and machine it in a single clamping.

Further down the supply chain, at BCW Engineering, located in Burnley, UK, a project in 2008 to add an Iemca gantry robot loading system to a twin-spindle Biglia CNC chucking lathe proved so successful that the loader paid for itself within months. This led the shop to invest in a second, identical automated machining cell, installed in 2009. This time, a Biglia B565YS mill-turn centre and Iemca Automata 2.5 robot loader were supplied by Whitehouse Machine Tools as a turnkey facility. Now, a third cell is planned for later this year.