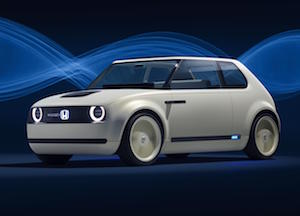 Germany – The OEM promised that every new car model launched in the region will feature electrified technology, in an announcement at the Frankfurt Motor Show. At the same time, Honda unveiled its new electric vehicle (EV), the Urban EV concept, which it said will soon be in production.

While the OEM is aiming for electrified technology on two-thirds of new car sales worldwide by 2030, the target for Europe is 2025. “Here in Europe, we see this move towards electrification gathering pace at an even higher rate than elsewhere,” said Takahiro Hachigo, Honda Motor’s president and CEO. He added that Europe was therefore the appropriate location for the global premiere of the “next step” in Honda’s ‘Electric Vision’ strategy.

The Urban EV is based on a new platform and features advanced technology “within a simple and sophisticated design”, in the words of the OEM. “This is not some vision of the distant future; a production version of this car will be here in Europe in 2019,” said Hachigo.

Before the Urban EV, Honda will introduce its CR-V hybrid prototype, which will go on sale in 2018 as the first hybrid SUV from the OEM in Europe. The vehicle features the Intelligent Multi-Mode Drive two-motor system which replaces a conventional transmission with a more compact unit and single fixed-gear ratio to "seamlessly" deliver torque to the wheels.