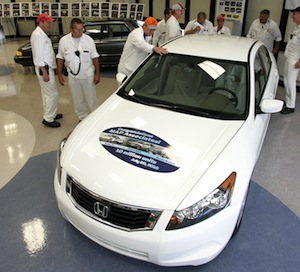 US – The cumulative total for the OEM’s four plants in the region came with the 10 millionth vehicle produced at Marysville, Ohio, which was the company’s first automotive plant in the US, starting production of the Honda Accord in 1982.

Honda produced a record 1,309,917 vehicles in 2013, representing an increase of 7.4% over the year before. Today, the OEM’s four US plants – Marysville and East Liberty in Ohio, Lincoln in Alabama and Greensburg in Indiana – make 11 different models: four passenger cars and seven light commercial vehicles (LCVs).

Honda’s engine plants in Lincoln and Anna, Ohio, plus its transmission plants in Russells Point, Ohio, and Tallapoosa, Georgia, have produced 23.77m engines and 18.64m transmissions.