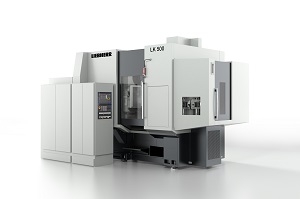 Liebherr says its LK 300 and 500 gear skiving machines are supplied on a “turnkey” basis with individual clamping fixtures for each workpiece. These machines are based on tried-and-tested components of corresponding large hobbing machines. In addition the company says that its newly developed LHGe@rTec control system contains the mathematical formulas for pressure angle corrections.

There is also an optional tool changer, which can be used to change between roughing and finishing tools and Liebherr says it offers a ringloader as a standard option for the workpiece changing device; other automation solutions, such as belts and robots, are available upon request.