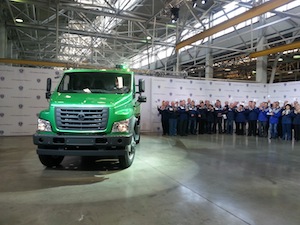 Russia – The launch began at Gaz Group’s Gorky Automobile Plant, which is part of Basic Element. The medium-duty truck is the third GAZ vehicle released this year, after the 19-seat Gazelle NEXT bus and the double-row, cargo-and-passenger version of GAZelle NEXT light commercial vehicle (LCV).

The GAZon NEXT family, which will also include the Sadko NEXT off-roader in 2015, has required an investment of $60m.