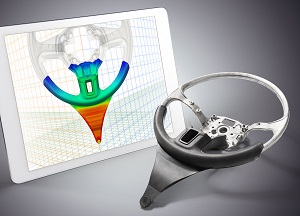 The Ultrasim simulation tool has been developed so that it can now predict the foaming and curing of the flexible integral foam system Elastofoam I for car steering wheels, says BASF. It’s claimed to offer detailed simulation that allows chemical reactions as well as the flow behaviour of the polyurethane foam in the mould to be calculated. At every point in the mould, the simulation accounts for process and environmental conditions such as temperature, pressure and material concentration as well as special component elements such as the metal skeleton and cables.

The company says that the detailed description of the integral foam systems available through this simulation tool, makes it is possible to identify critical air voids in the component, to adapt air vents and to design a stable manufacturing process for steering wheels before the mould is built. It’s claimed this system allows steering wheel manufacturers to reduce development cycles and costs.